2016 has been one of the strongest years in horror for AGES, with excellent comedy-horrors, supernatural frighteners and great sequels (shock!) from all around the world proving that the genre we love the most is far from dead.

Whittled down from an amazing 64 films, we, the writers from Scream, have compiled our top 10 horror films of 2016 to come up with Scream’s overall Top 10 and these are the results….

The Similars is a wonderfully eerie modern throwback to the sci-fi horror fare of the ‘50s and ‘60s, reminiscent of The Twilight Zone. Taking place on a cold, rainy night in 1968, it follows eight characters at a remote bus station that experience a strange phenomenon. The less said the better; go into this blind and prepare to feel the hairs on the back of your neck stand up as your mind is simultaneously blown. You can read our review here.

Southbound breathed fresh life into the anthology sub-genre with its selection of impressive and creative segments that spanned across one night on the same stretch of road. Not only was it filled with great imagery, it was genuinely quite unsettling in parts and boasted some truly “WTF!” moments that we loved. You can read our review here.

At number 9, we have one of the most bizarre, ludicrous and greasy horror films of, quite honestly, all time: The Greasy Strangler. It’s a non-stop rollercoaster ride of madness that bursts with truly obscene and cringe-worthy sequences, but we can’t deny its excellence. With a couple of great performances from Michael St. Michaels and Sky Elobar, as well as some of the funniest and most unforgettable scenes in horror history, it would have been a travesty if this didn’t make the Top 10. You can read our review here.

The surprise sequel to 2008’s Cloverfield sits comfortably at number 8 of our list and proves that horror sequels can be excellent and change can be refreshing. By ditching the found footage aesthetic, scaling down the setting and increasing the mystery, 10 Cloverfield Lane was a brilliant follow-up to a pretty brilliant monster flick and is certainly one of the best films of the year. You can read our review here.

Hush is one of the best home invasion films we’ve seen and pits a deaf writer against a masked intruder. What ensues is a nail-biting 80 minutes of tension and suspense as the lone Maddie battles for her life. With the help of an extraordinary use of sound and a thrilling performance from John Gallagher Jr., Hush is essential watching and proves that women can kick some ass. You can read our review here.

The Neon Demon is definitely the most dazzling horror film of the year as it packs striking visuals and headache-inducing effects into a story about monstrous models. With a host of great performances and a few moments that will leave you open-mouthed with shock, The Neon Demon is a spectacular horror film about our obsession with fashion and our preoccupation with beauty. At its best it’s a marvel, with its relentless descent from a fairy tale beginning to a hellish end showing the horrors that lurk in the vampiric world of celebrity. You can read our review here. 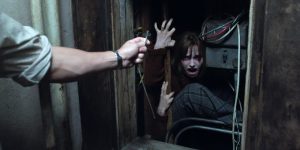 The Conjuring 2 is our number 6 with the sequel proving that we still love the Warrens and their supernatural adventures. This one pits the two against a poltergeist in London, with the change in location furthering the film’s entertainment value. With a few genuinely chilling moments and a heart-felt story at the centre, The Conjuring 2 was not just a brilliant follow-up, but a tremendous horror film that is worthy of its place in our top 10. You can read our review here. 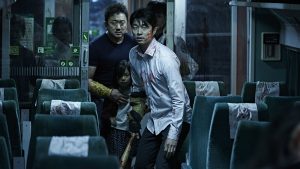 5) Train to Busan
Next on our list and at a respectable number 5 is the zombie masterpiece Train to Busan. Director Sang-ho Yeon has delivered a heart-racing ride that knows how to pull on every heartstring, delivering some of the most heart-racing action to ever grace the screen. It’s gory, bloody, violent and one of the most terrifying and unabashedly entertaining rides of the year, if not ever. You can read our review here. 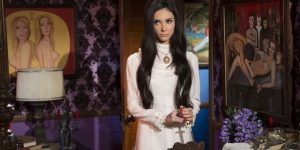 4) The Love Witch
We fell hard into the charms of The Love Witch; a twisted romantic horror with a magical twist. It explodes with gorgeous cinematography and a playful, witty tone that is impossible not to fall in love with. Lead by the striking and enigmatic performance from Samantha Robinson, this lovey-dovey tale is a complex and funny feminist dream. You can read our review here.

Smartly written, savage and stylish, Evil Dead-director Fede Alvarez proves he can do more than just supernatural horror in this excellent home invasion thriller. Boasting solid performances from Jane Levy, Dylan Minnette and Stephen Lang, Don’t Breathe steadily moves forward keeping the audience at arm’s reach before its dramatic and unforgettable unravelling. With one of the most gruesome moments in 2016’s horror, this is a must-watch film that will stick with you long after the end credits. You can read our review here. 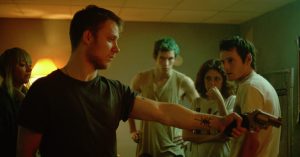 Jeremy Saulnier’s Green Room is still one of the most shocking films of the year. Pitting a young punk rock band against a blood thirsty gang of neo-Nazis, the level of violence is unrelenting and unsettling. Even on repeated viewings, the film retains its impact and remains unbelievably mean-spirited and devastatingly bleak. Green Room is pure horror and more than worthy of its place at number 2 of the best horror films of this year. You can read our review here.

The Witch is this year’s most divisive horror film, so it’s not for everyone. That said, those that were cast under its spell will probably tell you that it is one of the best horror offerings in quite some time and we are one of them. Taking place in New England during the 1930s, it follows a Puritan family of settlers who, after being exiled to the edge of dark wood believed to be inhabited by a witch, start to implode on themselves once their youngest child goes missing. Rife with paranoia, superstition and religious hysteria, The Witch is one of the most accomplished, impressive and thought-provoking offerings in quite some time, so is our number 1 horror film of the year. You can read our review here.

A special mention goes to The Mind’s Eye, The Wailing and Baskin, which narrowly missed out on a place in the Top 10 and are a trio of horror films more than worthy of a watch.

Merry Christmas and a Happy New Year to all our wonderful readers.