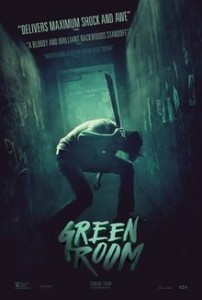 Synopsis:
A punk band get trapped backstage in a green room and are forced to fight, or cunningly evade, a horde of neo-Nazis.

Writer/ Director Jeremy Saulnier follows the scintillating Blue Ruin with this terse, gruelling and gore-soaked shocker. Green Room’s set up unfurls serenely, seguing pensive visuals and tilted shots of shaken Oregan fields, disrupted by a car accident. This is where we meet The Ain’t Rights: an emo-hipster punk band, halfway through a tour and roaming road trip. An ambient score instils calm as the band emerge unscathed from the crash. This tranquil mood remains as they assess finances, siphon fuel and head to a pod-cast interview. After securing an extra gig booking , the band travel to a remote, dejected venue, which is where the mayhem begins. Someone sees something they shouldn’t and the group become trapped. Meanwhile, the venue’s civil but malign owner Darcy (Patrick Stewart) prowls the purlieu with his gnarly neo-Nazis, calmly waiting for the frightened group to emerge.

Saulnier extrapolates tension via well-plaited conflicts while lacing suspense with exhilarating violence and heart-halting gore. The tale is tight and told methodically but isn’t overly regimented by plot-points and gauchely pried in set pieces. As the central concept is so unique, augmented by realism and executed with tact, the single set location model doesn’t feel tired in this context. Terror sieves from Green Room via edgy dialogue, dubious weapon exchanges, concordat subterfuges and thwarted escape plans, which constantly meddles with the viewer’s expectations. Some of the caustic dialogue and characters are a little too ironic and cognizant. Even though this type of innate sarcasm is a current sub-cultural component that has (along with the music) the potential to possibly date the films, ultimately Green Room’s craft and technical feats prevail. In a way, the sardonic sub-cultural elements augment the realism but at other times they hamper it. No one walks away from an explosion in slow motion but scenes featuring unruffled characters dropping cool phrases at a time of crisis while brandishing weapons like 80s action icons, don’t sit well within the stark setting/ visual style. But these are minor yet curious quips and are not frequent enough to be distracting. 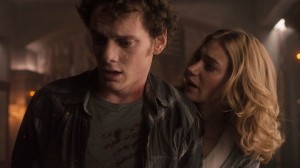 Anton Yelchin drones in the role of twitching guitarist Pat, channelling Tim Roth and Woody Allen, but delivers a fine, multi-layered performance, while Imogen Poots and Alia Shawkat resound as a band member and luckless “groupie”. The Ain’t Right’s “punk” ethos is illustrated by their lack of an online presence which makes them seem even more isolated and at risk in the green room, as the gig was a spur-of-the-moment booking and nobody knows where they are. They start their set bravely with an anti-Nazi ditty which, along with the luddite mantra, probably authenticates the band’s punk status, despite their chic idiosyncrasies. Other characters evolve as they crack under pressure and reveal formerly hidden facets while writer/ director Saulnier siphons dread from a number of sources in the manner of a genre master. Suspense unravels meritoriously and, unlike many modern horror films, the monsters are not constrained to the shadows but are credibly fashioned characters who are even (in some cases and the cold light of day), not totally odious. As a result, Green Room taps into an innovative genre realm, utilising its reality in a manner that most found footage horrors can no longer achieve. 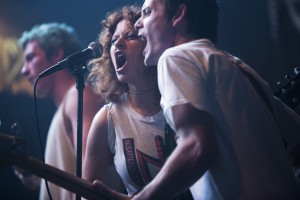 It’s a pulse-pounding masterpiece that mounts unease efficiently before lunging for the throat. Green Room is also opaque, stunningly captured and with a constantly gripping plotline . The fear of the unknown no longer applies as the story teases out its sheltered psychotics from behind the facades of warped but affable music lovers; similar to the slow reveal of Hannibal Lecter in The Silence of the Lambs. Blood erupts and cataracts by the bucket while munitions, veneers and attack dogs are deployed with face-mangling consequences. Stewart suavely sieves evil as Darcy while Yelchin is great but grating as hipster punk Pat. Machete hacks and shotgun blasts pump Green Room with a plucky shock factor. Bodies are feverishly stabbed and cleaved while extremities meld well with the elegant execution to make it a terrific tension-loaded pulse-disrupter. Like the disobedient love child of Hitchcock and John Carpenter the story swiftly escalates into a terror-loaded tantrum throughout the second act, by way of tight plotting, complex characters and wince-inducing bloodshed.