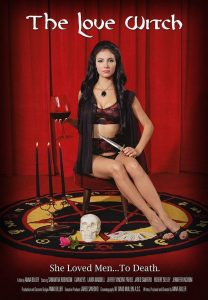 Synopsis:
In this tribute to the dazzling films of the 1960s, The Love Witch follows a modern-day witch called Elaine who will do anything to fall in love.

The Love Witch is a playful warning about the dangers that lurk behind a pretty face, but I have fallen in love with The Love Witch and I am not afraid to admit it. This is a charming, funny and surprisingly touching anti-fairytale that is propelled by a sweet, seductive and quietly menacing performance from Samantha Robinson as the wicked witch.

There is an undeniable hilarity in The Love Witch which lies in the complex characterisation of Elaine; a serial killer with her heart in the right, or maybe wrong, place. Motivated by her desire to fall in love and live happily ever after with her Prince Charming, Elaine’s mission sees her kill the men that she seduces. This is the opposite of a traditional slasher which will typically see a man kill women (and other men) violently with weapons. Writer-director-editor-costume designer Anna Biller takes this notion and crafts it for her unique and overtly feminist vision of a woman killing men with her love.

Beauty is this killer’s weapon; she entices men with her alluring personality and uses the power of sex until they are putty in her hands. She opens up their emotions with her hallucinogenic potions which take away their power, leaving all the control with Elaine. The explicit feminism in The Love Witch will be adored by women of all ages, because this witch kills men that, honestly, deserve it. If they’re not complaining about the lack of sexy, intelligent women, they’re cheating on their wives or jumping into bed with a woman they barely know. Elaine may be striving to find the man of her dreams, but The Love Witch denounces the men that are obviously no good for her and that is liberating for female audiences. Elaine is a symbol of female power; both magic and real.

Like the men who are astounded by Elaine’s attractiveness, the audience will be mesmerised by the film’s stunning visuals that pay homage to early films of the ‘50s and ‘60s. Every scene is dominated by sumptuous, bright colours of red, blue, greens and yellow that extend the colour palette of Elaine’s tarot cards into her outer world, but also work as an overall representation of the film’s concern with elegance and beauty. As an audience, we will be stunned by Anna Biller’s commitment to crafting a film so beautiful, easily being wooed by The Love Witch’s careful attention to detail in every shot. Biller’s film is a visual delight, packed full of retro costuming, cars and sets which are shamelessly garish, but deviate refreshingly from the visual style we’d typically expect from horror films that drown their films in shadows and shades of blues and greens.

The score flows from string-heavy to further the film’s vintage vibes to enchanting organ tracks that channel The Love Witch’s more mystical side. Biller’s depiction of witches is both classic and modern; Elaine practices the art of witchcraft by reciting spells and creating potions in her homely laboratory, she strips to her underwear to erotically dance for her male suitors and lies on a rug with a pentagram pattern. She arrives to her garish home-castle which could easily be housing Dracula on a road with BMWs lining the streets, dines at a Victorian-era café and sells lotions and potions to a local apothecary. The Love Witch bursts with old-school charm, but has a clear intention to leave its time setting ambiguous, preferring to focus on what lies on the outside with its crafting of a sumptuous and textured exterior. It is easy to forget that the film is not a real Technicolor achievement from the ‘60s; however, its clashing of modern and old sensibilities creates a gorgeous coating to a film that is already loaded with layers that are dying to be peeled by those who desire to do so.

The Love Witch is home to an extremely complex characterisation, because Elaine is a monstrous killer, but it is easy to empathise with her. We are given insights in to her troubled past and the halo effect comes quickly into force, because she’s extremely beautiful and looks as if butter wouldn’t melt. However, to ensure that we don’t fall in to the same trap as her male victims, we are introduced to her monstrous side through a sharp and honest narration. She describes wanting to be a witch because she purely wanted magical powers and the ability to get what she wants. It is clear that there is menace lying beneath this pretty face and it is further emphasised through extreme close-ups on Elaine’s vibrant eyes that are true windows to her precarious soul. 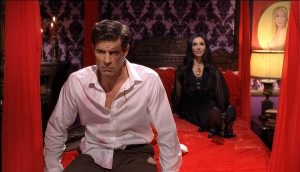 The Love Witch is a feminist and visual dream that channels the films of days gone by with intelligence and wit. With a stunning performance from Samantha Robinson at the film’s centre and a complex story at its heart, The Love Witch is truly delightful and one of the year’s best, most beautiful horror films.