Synopsis:
Paranormal Investigators Ed and Lorraine Warren (Patrick Wilson and Vera Farmiga) are assigned by the church to travel to London and determine whether or not supernatural forces are haunting a family in Ponder’s End. Meanwhile, Lorraine becomes tormented by visions of death and a petrifying spectre which casts a shadow over their investigation. 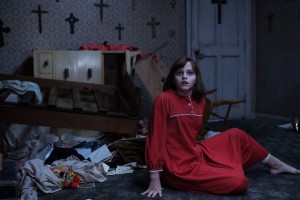 “After everything we’ve seen, there isn’t much that rattles either of us anymore,” Lorraine Warren states via voice-over in The Conjuring 2’s opening sequence. This will no doubt echo the views of many horror fans who have witnessed this type of haunted house film a thousand times before. Those regurgitated spin-offs, blighted by banal tropes and predictable boo jumps which serve as simple, sterilised versions of classics such as: The Haunting, The Innocents and The Shining. What may also blight audience expectations of The Conjuring 2 is the fact that it is a follow-up. But where many sequels wither in the shadow of their predecessors, fear not (or fear hugely rather) because genre master James Wan has fashioned a frenzied, fun and fright-loaded follow-up to his terrifying 2013 blockbuster. As well as being hugely entertaining, The Conjuring 2 is adorned with spiky, pioneering and potent scares that are so sharp they could probably cause a heart attack in less desensitised viewers.

With a punchy, self-contained set-up which references another infamous real-life haunting/ horror franchise, the story kicks off in a terse and promising fashion. Flitting from Long Island to London, England 1977 where we meet lower working class family, the Hodgsons. Twelve year old daughter Janet (Madison Wolfe) is making the wrong kind of friends at school while single mum Peggy (Frances O’Connor) struggles to feed her four children in their dilapidated council property. Peggy waits for benefits payments while living under the illusion that things can only get better. Thankfully, for our sake, she is gravely mistaken. After her daughters dabble with a home made Ouija board in attempt to find out what happened to their father, events turn swiftly south as malevolent spirits are inadvertently summoned then start haunting and taunting the poor family. Obligatory squeaky doors, creaky floorboards and charred fire places are accompanied by toys that play with themselves (don’t) while remote controls are misplaced, beds shake, crucifixes spin and children sleepwalk before summoning the type of croaky voiced phantoms that neither the clergy nor a cough syrup could cure. 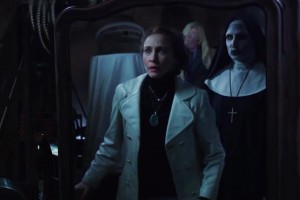 While none of these features may seem that unique, it is James Wan’s ingenious execution and directorial knack that crafts the excitement and makes the skin-crawling scares stand out amongst the typical subgenre generic along with an air of “what’s in the dark?” mystery. An abrupt switch from slick rural America to a glaringly fabricated kitchen-sink style set-up seems jarring at first, especially when coupled with the supernatural facets, but Wan eases this transition via a vibrant montage of 1970s London. Using news reels and stock footage and the sound of London’s Calling to generate a genuine sense of the time along with the flickering images of The Likely Lads and Thatcher on the telly, and Starsky and Hutch posters on the kid’s bedroom wall. This jovial clout of 70s pop-culture bridges the chasm between Brit, Ken Loach style social realism with heightened American horror fantasy. Wan then goes some way to harvest dread and fashion frights like no other mainstream horror film-maker working today. The plot pulses through a number of goose-bump needling and literally hair-raising set-pieces that rattle senses well into the second half before the Warrens even enter the foray.

A priest and a team of parapsychologists from the Society of Psychical Research are called upon to document the events but are unable to stop them, which leads to the beckoning of Ed and Lorraine. The plot plods a pinch in the film’s final third when the Warrens arrive and things trip slightly into the contrived and ridiculous as shuddering CG beasties and ephemeral phantoms show up to cause a commotion, while a slap of light comedy and a surprising musical sequence raises eyebrows before C2 redeems itself in a satisfying finale. Scenes featuring a boy with white eyes staring through gaps in a banister and a painting of a ghost in the dark are the stuff of nightmare stoking genius yet there is no real hard violence and very little bloodshed. Despite it’s glossy veneer and minor flaws, The 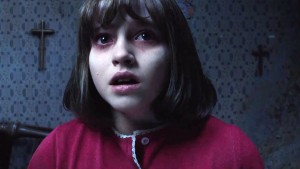 Conjuring 2 delivers the kind of conscience tarnishing terror that will grind your nerves to the core before cracking open your soul and carelessly poaching the contents. It may not be a masterpiece but features some of the most expertly crafted horror to grace the silver screen in a long time and is also enormous, exciting fun.