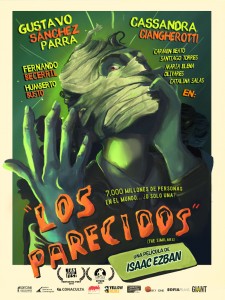 Synopsis:
On a rainy night of October 2nd 1968, eight characters waiting on a remote bus station for a bus heading to Mexico City start experiencing a strange phenomenon.

Mexican born writer and director Isaac Ezban’s first feature film ‘The Incident’ was a massive hit amongst the festival circuit. It received high praise from seasoned film maker Joe Dante, world wide critical acclaim and has so far won 15 awards to date. So I am very pleased to report that Ezra has produced another feature called ‘The Similars’ (Los Parecidos)

The Similars received its world premier at Fantastic Fest 2015 and was then shown at Sitges 2015; where it won the Blood Window Award (Best Latin American Feature). It is also reported that Ezra has now become the first director from Mexico to have two films in two years in a row to be shown in both festivals. This is all very impressive stuff but when you watch his films, it soon becomes very clear why Ezban is creating waves amongst his peers.

The cast in The Similars is kept to a minimum but each character is strong with purpose and defining moments. The story is rich with paranoia, fighting for the loss of ones identity and challenging how we perceive the world around us.  All of which screams classic 1950’s/60’s science fiction.

The main character Ulises (Gustavo Sanchez Parra) is desperate to catch a bus to be with his wife who is about to give birth. However, due to the torrential rain, the bus appears not to be arriving any time soon. So being stuck at the bus station he begins to interact with a bizarre group of characters, all of which begin to slowly take on his physical features, beard and everything. But when a sick young boy called Ignacio (Santiago Torres) turns up, that’s when the bizarre gets ramped up a notch or two. His mother regularly smothers his face with her hands and injects a milky fluid into his neck in an effort to subdue him. The people at the bus station believe that they are part of a secret American / Russian government experiment. The human race appears to be redefining itself as everyone and everything is becoming like the bearded man – this includes the pictures from girlie mags and dogs.

One poor lady can’t handle her new face and so decides to hack it off. From start to finish the plot developed and stayed fresh throughout. The ending was absolutely terrific because it really wasn’t the end, it was only the beginning.

The setting of the film is also of no coincidence, as on October 2nd 1968, there was a real life event called the Tlatelolco Massacre, whereby a number of students and civilians were slayed during an Anti Government demonstration. It could be seen as quite poignant to the film as this is the destination of our characters. We are then left questioning this event by offering ourselves alternative explanations.

The Similars has been written with a great deal of imagination, warped humour and a strong storyline. Seemingly filmed in black and white with slight colourisation, it becomes a wonderful blend of a psychological thriller and science fiction with a dash of the macabre. With original music by Edy Lan, which is comparable to the unnerving sounds of Psycho and Cape Fear, it will no doubt reignite nostalgia and a longing to revisit some classic science fiction movies, without forgetting the iconic television series The Twilight Zone.