Rock on! Jason Lei Howden has announced on Facebook that he has completed the script for the sequel to this year’s hit horror Deathgasm. Deathgasm followed a couple of teenagers who unwittingly summon an ancient demon called The Blind One. Soon, bloody chaos and hilarity ensues, making Deathgasm a must-watch horror-comedy from writer-director Jason Lei Howden. 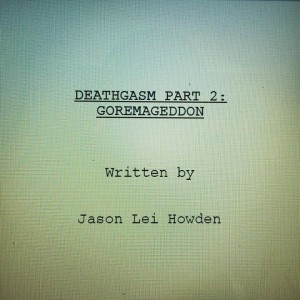 The Facebook post from from Howden is as follows, “So I just finished this. There is literally more gore in the first 10 minutes than the entire first #deathgasm. If you kinda liked the first, this will make your head implode. If you thought the first Deathgasm was puerile, juvenile and dumb then Goremageddon will melt your face off and force you to barricade yourself inside, safe with some Terrance Malik and Coldplay.”

Deathgasm Part 2: Goremageddon sounds like a wonderful sight to behold and we can’t wait to get our hands on it. More gore and the promise of face-melting is enough to get us excited.

If you’re in the USA you can purchase Deathgasm right now on VOD or on 5th January on DVD and Blu-Ray. If you’re in the UK you have until 29th February 2016 before you can add it to your collection on DVD.

Deathgasm features in our Top 15 Horror Films of 2015 list which you can check out here, and you can also read our rave review over here.