Synopsis:
Two teenage boys unwittingly summon an ancient evil entity known as The Blind One by delving into black magic while trying to escape their mundane lives.

METAL IS THE WAY!

If you’re a ’70s kid like me then there’s a chance you’ll share the same indulgent memories of the ’80s staple diet of heavy metal horror, particularly quintessential classics such as Trick or Treat and Monster Dog. Oddly enough, the end of that very era saw the release of the first of Bill and Ted’s Adventures and I say oddly because whilst Director/Writer Jason Lei Howden’s feature debut, Deathgasm, is oozing at the seams with wigged out kiwi humour and grisly gore a la Peter Jackson it also plays out as a deeply dark riff on the aforementioned movies.

Whilst the emphasis on metal music might put “non-metallers” off at first sight, musical tastes can be left in the foyer as Deathgasm has the same infectious appeal as films like Whiplash where, regardless of your musical penchants, you just end up electrified by each and every note. This sensation is perfectly portrayed in the film when Kimberley Crossman’s character, Medina, pops her metal cherry and drifts off into an alternate reality sporting demigoddess get-up atop a mountain. Alright, maybe I’m exaggerating a tad and Deathgasm won’t bring out the celestial being in you but you get where I’m going with this.

Something that is always a risk when it comes to horror movies of the wacky kind is that they can so easily take a wrong turn at any given moment if not handled with the utmost care. Thankfully Lei Howden serves up some brutally effective comedy, gore and unexpected twists, all of which are bolstered by such a charismatic and infectious cast. Milo Cawthorne is stainless as Brodie, the new metal-head on the block who sticks to his guns despite his hollow man demeanor whilst James Blake’s Zakk is the perfect contrast, boasting good looks and an unreserved nature whilst an inferiority complex clearly writhes inside of him. Ultimately, the chemistry between such opposing personalities propels the plot and adds so much more substance resulting in a film that is so much more than just 90 minutes of sheer gross-out high jinks. 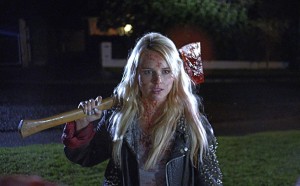 The rest of the cast are just as effective and, keeping with the badass movie chick times we live in, Deathgasm gives us the seemingly sweet and innocent Medina who rises to the occasion and before you know it she has no qualms when it comes to chopping into her demonified neighbours like there’s no tomorrow. Lest I also forget to mention the geektastic supporting roles put in by the other band members, Sam Berkley and Daniel Cresswell, whose horseplay also makes for laughs aplenty.

Whilst the actors certainly carry the weight of the film flawlessly, the undeniable star of the show is the splatter. With Lei Howden already well-practiced in the art of gore, there was no doubting that Deathgasm was going to stand and deliver with buckets of blood and, along with his blood and gore technicians Storm McCracken and Tim Wells, this is a team of splatter-meisters to keep your eyes on. Replete with gloriously gory set pieces you’ll be smiling with anticipation every time you see a weapon raised and words can’t even begin to describe the ingenuity of some of the slaughter. Not wanting to give anything away, suffice it to say that dildos certainly live up to their name and provide orgasmic levels of (viewing) pleasure.

The aesthetic also perfectly emulates the dark comedic tone of the film with absolutely nothing to fault from the stunning cinematography provided by pro Simon Raby (Second Unit DP on the likes of Elysium and The Lord of the Rings saga no less) right down to the deft use of animated graphics used to introduce the characters.