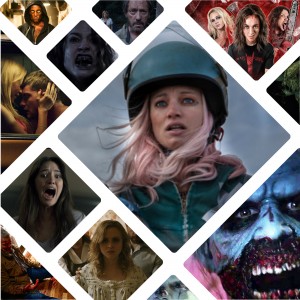 With just a couple of weeks left until we celebrate the end of what has been one of the better years for horror in ages, here’s my round up of the fifteen films that really made their mark. As the year began It Follows threw down the gauntlet and looked like THE horror film to beat – and it pretty much remained that way – but David Robert Mitchell’s masterpiece wasn’t the only novel nightmare to cause a commotion, particularly on the festival circuit, resulting in the following decidedly diverse list:

15. Tales of Halloween
Ten stories are woven together by their shared theme of Halloween night in an American suburb, where ghouls, imps, aliens and axe murderers appear for one night only to terrorise unsuspecting residents.

I’ve waited a long time to be able to say this but Tales of Halloween is the first anthology film in years that doesn’t contain any segments that it could have done without. If the film’s final statement is anything to go by then we could be certainly be looking at a regular Halloween franchise. I could definitely get used to that because this broom totally fits and I absolutely urge you to fly it.

14. Backcountry (AKA Blackfoot Trail)
An urban couple go camping in the woods and find themselves lost in the territory of a predatory black bear.

Backcountry is a riveting depiction of how willpower can overcome all obstacles, immersing the viewer in a palpable sense of alarm. Adam MacDonald certainly didn’t lose HIS bearings when shooting this film and it’s a directorial debut that I’m sure will put him on the map that Jeff Roop shouldn’t have left at home. For a small-budgeted film, Backcountry is an immense directorial debut and MacDonald’s follow up, Wolf at the Door, couldn’t come sooner, if it were up to me.

13. The Hallow
A family who move into a remote mill house in Ireland find themselves in a fight for survival with demonic creatures living in the woods.

The Hallow might not be quite the game changer that Carpenter’s The Thing was but Hardy has made all the right decisions to keep clear of the roots of all evil that plague many a creature in the woods feature. His keen eye for the smallest of details – be it the performances, the effects, the cinematography, the score or the scares – ensures that The Hallow throws some highly flammable nightmare fuel on the fire.

12. Frankenstein
A married couple of scientists create a modern-day monster.

Despite umpteen Frankenstein remakes, rehashes and adaptations, Bernard Rose’s ability to effectively reinvent the wheel for the modern generation, highlighting the perils of frighteningly feasible cloning technologies, speaks volumes for his ability as a filmmaker. This kind of reworking is what keeps Frankenstein’s grotesque yet sentient monster well and truly alive almost 200 years after Shelley’s masterpiece and Rose’s adaptation is certainly tantamount to the original novel’s subtitle as it really is a modern prometheus.

11. Deathgasm
Two teenage boys unwittingly summon an ancient evil entity known as The Blind One by delving into black magic while trying to escape their mundane lives.

10. Bite
While on her bachelorette party getaway, Casey, the bride to be, gets a seemingly harmless bite from an unknown insect. After returning home with cold feet, Casey tries to call off her wedding but before she’s able to, she starts exhibiting insect like traits. Casey succumbs to her new instincts and begins creating a hive that not only houses her translucent eggs, but feeds on the flesh of others.

If gross-out movies have you drooling with anticipation then Bite is a film you should be itching to see already. Archibald’s unashamedly icky feature is easily one of the best the body horror sub-genre has to offer and is his best piece of work to date.

9. Spring
After his personal life falls apart, Evan decides to take a trip to Italy. On his arrival he meets Louise, a mysterious and charismatic young woman who harbors a dark, primordial secret.

Spring is not strictly a horror film nor is it a drama instead it transcends all genres to deliver a story that feels entirely unique. Benson’s script is intelligently written and his co-direction with Moorhead is superb. Together the duo show plenty of flare which is difficult to resist as a genre fan so Spring is a monster you won’t want to miss.

8. Summer Camp
Four American counsellors at a European summer camp must deal with the outbreak of a rage-inducing plague. With only a matter of hours before the children they are meant to be supervising arrive, the group must survive the night and stop a bigger nightmare.

Summer Camp is first and foremost a horror film and has all the elements that will keep you perched on the edge of your seat. Sure, there are a hand-full of laugh out loud moments but Marini keeps a tight grip on his film and is quick to stun audiences with jarring horror moments and for this reason we hope he returns to the director’s chair soon as he’s left us yearning for so much more.

7. Sun Choke
Recovering from a violent psychotic break, Janie is just trying to get well under the care of her lifelong nanny and caretaker. She begins to veer off the road to recovery when she develops an obsession with a young woman to whom she feels an inexplicable yet profound connection. The obsession turns increasingly invasive, and wedges all three women into an ever-tightening, and progressively terrifying struggle for control.

Sun Choke is a sterling example of a thought-provoking dissection of the psychosocial implications of well-intentioned but ultimately toxic protective care. If more ambiguous, yet wholeheartedly absorbing films akin to Lynch, Polanski and early Aronofsky are up your street then this is one you won’t want to miss.

6. The Pool
A father takes his wife, two sons, a friend and his daughter on a hiking trip in the woods. After a long search for a spot to set up camp, the father finds a perfect place overlooking a pool. Everybody seems to get settled quickly and when the night falls the two sons listen to a ghost story told by their father’s friend at the campfire. The youngest son begins to have strange dreams and bizarre occurrences begin to develop at the camp site.

The Pool works so well thanks to Mitchell’s sage decision to give his human characters and their psychological disintegration preference over supernatural shocks. This is an essential chaotic, claustrophobic and character-driven chillfest for anyone with a penchant for sui generis filmmaking as The Pool delivers a fiendishly fresh ‘horror in the woods’ dynamic.

5. Clown
A loving father finds a clown suit for his son’s birthday party, only to realize the suit is part of an evil curse that turns its wearer into a killer.

With Clown the filmmakers have created an all-new monster of demonic proportions and it’s a concept that certainly deserves to spawn a sequel or two as the sky really is the limit. With so many clowns floating around at the moment I went in with low expectations but came out with nothing but praise for the film. This new devilish trouper is surely set to join the hall of famous horror icons alongside the likes of Jason, Freddy and, of course, Pennywise.

4. The House on Pine Street
A psychological horror about a young woman coping with an unwanted pregnancy after moving into a seemingly haunted house.

Whilst I’ve never really been the world’s biggest fan when it comes to supernatural yarns, I’m quite the patsy for provocative and character-driven plots – something The House on Pine Street provides in leaps and bounds. Considering the skeleton crew and budget involved, this is one production sure to encourage new and budding filmmakers to take the plunge as it really is one of the most meritorious indie horrors I’ve come across this year.

3. He Never Died
Jack’s in a rut. Depression and severe anti-social behaviour has whittled down his existence to sleeping and watching television. Seeing the human race as little more than meat with a pulse, Jack has no interest to bond with anyone. There’s little purpose for him to make friends with someone he’d eventually eat or outlive by more than a millennia. The fuse is lit when Jack’s past comes back to rattle him. Jack must now walk a tight rope of sobriety and try to eat as few people as possible in this violent tale of personal responsibility.

Krawczyk has unquestionably struck the jackpot with He Never Died as it’s an inspired, gruesome, violently funny and, at times, truly touching take on the subgenre. With talk of a spin-off series and news that Krawczyk has pretty much scripted an entire first season, I have much faith that we’ll soon be enjoying a weekly dose of Jack for years to come. Other than that, this new facet of Rollins in a leading role is something that I can absolutely get used to and I hope he can too.

2. It Follows
After a sexual encounter with her boyfriend, Jay is told she will be followed by something. She won’t know what it is or what it looks like, but she’ll know it’s there and it will try to kill her. In short, that is the synopsis of It Follows and that’s all you need to know. In fact, stop reading this review and just go and watch the damn thing, because it’s brilliant.

Horror has certainly needed an upheaval recently, with countless remakes and not-so-brilliant sequels; it’s refreshing to see that original scary storytelling is not dead yet.Hopefully, It Follows marks a change in the genre and more film-makers will be inspired to follow in its footsteps, creating something original, entertaining and seriously scary.

1. Turbo Kid
In a post-apocalyptic future, THE KID, a young solitary scavenger obsessed with comic books must face his fears and become a reluctant hero when he meets a mysterious girl named APPLE. Armed with little more than blind faith and an ancient turbocharged weapon, THE KID learns of justice and friendship and embarks on an incredible journey to rid the Wasteland of evil and save the girl of his dreams.

Turbo Kid is a masterpiece in its own right. It packs so much more into its 90 minutes than so many MOR summer blockbusters, and it does so with explosive imagination, kinetic gross-out comedy, and cunningly-devised, over the top performances that fit snugly with the film’s charming absurdity. If any film deserves to become a cult item then Turbo Kid’s supremely inventive bike ride does.

Honourable mentions:
The Demolisher, The Sublet, AAAAAAAAH!, Digging Up the Marrow, The Diabolical, The Corpse of Anna Fritz, Stung

We love HORROR! Can you tell? Coming to your night

We love HORROR! Can you tell? Coming to your night