Blood Feast Remake to hit US Cinemas in April

A trailer for the remake of Blood Feast hit the ‘net nearly a year ago, but since then all has been ominously quiet. The silence has now broken, because the new Blood Feast is set to be unleashed in cinemas in the USA from 28th April. Hooray!

Synopsis:
Fuad Ramses and his family have moved from the United States to France, where they run an American diner. Since business is not going too well, Fuad also works night shifts in a museum of ancient Egyptian culture. During these long lonely nights, he is repeatedly drawn to a statue representing the seductive ancient goddess Ishtar. He becomes more and more allured by the goddess as she speaks to him in visions. Eventually he succumbs to her deadly charms. After this pivotal night, Fuad begins a new life, in which murder and cannibalism become his daily bread. He starts to prepare a ritual feast to honour his new mistress, a lavish affair dripping with blood, organs, and intestines of human victims. As butchered bodies are heaped upon the Altar of Ishtar, Fuad slowly slips further into madness, until he is no more than the goddess’s puppet, who also thirsts for the blood of Fuad’s wife and daughter… 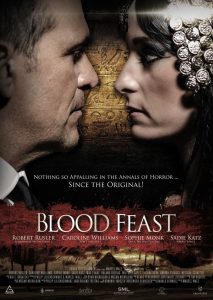 The re-imagining of Herschell Gordon Lewis’ shocking 1963 original has been directed by Marcel Walz (La Isla, Schlaraffenhaus, Seed 2) and you can check out the trailer from June below. It looks expectedly and horrifically gory, so it’s sure to appeal to those that like their horror impressively blood-drenched and stomach-churning.

You can read our interview with director Walz here, where he talks glam-gore and the idea of pushing his film too far in terms of violence. We thought the film was great when we caught it at FrightFest last year and were particularly impressed by its effortless ability to leave you feeling queasy. Check out our review here.