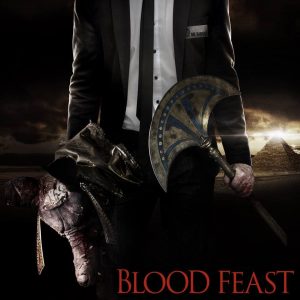 Faud Ramses (Robert Rusler) and his wife Louise (Caroline Williams), with the help of their daughter Penny (Sophie Monkton), run a retro American diner somewhere deep in suburban Paris. The business is struggling and in an attempt to make ends meet Fuad also works late shifts at a museum in the city. Long lonely nights, his failing restaurant and worsening health problems begin to play on Faud’s mind however, with alarming results. Who is the strange woman (Sadie Katz) who appears to him each night in the quiet corridors of the museum, and what is the terrible request she makes of the increasingly unhinged Faud? A request which will have horrifying repercussions for not only him, but also anyone who has the misfortune to cross his path.

It has to be said that German writer / director Marcel Walz’s Blood Feast (2016) – his reimagining of Herschell Gordon Lewis’ infamous 1963 gore classic – is way better than it should be. For, despite a non-dimensional plot – highlighted by threadbare dialogue and cringe enducingly bad jokes – some of the sickest gore you’ll ever likely see on the screen and characters who, for the most part, have few if any redeeming qualities, the resultant film is strangely fun to watch.

You may consider it sacrilege for a horror film fan to admit that they haven’t seen Lewis’ original gorefest, but there are, believe it or not, a few of us still around. This seems of little consequence however as the notoriety of the cult film is so well documented, that you almost feel you have watched it by osmosis. Also, where a film’s storyline and premise are clearly only be there as an excuse to connect one spectacularly bloody set-piece with the next, there seems little point in putting yourself through the ordeal of watching the whole thing – just go on youtube and view the best ‘cuts’.

As a result of this you may question the logic of this new film, particularly when it amounts – as Walz would likely admit – to little more than a rehash of the earlier version. One of the major problems with remaking films which are considered classics, is that whatever a filmmaker does, it will seldom equal or better the original. However the ineptitude of Lewis’ film – the atrocious acting and sloppy special-effects are apparently a large part of its appeal – means it should be relatively easy to improve upon. A factor which possibly plays in the new film’s favour.

Where Walz’s Blood Feast is concerned it’s probably safe to say his main aim was to have fun and, quite literally, try and up the gross factor from Lewis’ vision. In the 1963 film the effects are apparently so bad they’re laughable. Clearly though there has been a degree of advancement in this field in the interceding fifty odd years. Even so, much of what’s on show this time round will make the viewer cringe more from the thought of what is taking place than for how realistic it looks, even if a D.I.Y. castration scene which leaves nothing to the imagination is wincingly authentic. Everything else however – from a particularly rubbery looking extracted tongue, to a thoroughly nasty eye gouging opening sequence – is so over-the-top, that you’ll be torn between laughing and throwing up.

Which is the secret that, in the end, makes this new Blood Feast work. Aside from the bad acting, nerdy characters and gross-out effects, it manages to do what all good fright films do – namely leave you smiling. The best horror is like the most effective roller-coaster ride: it makes you feel uneasy in anticipation, slightly queasy whilst in the midst of the experience, but has you wanting to go through it all again the minute it’s over. All of which Walz’s film does brilliantly.