An Unsettling and Tense Trailer Arrives for Morgan

Yesterday we showed you the first set of images for the sci-fi thriller Morgan and today we have the trailer to share with you. It’s an unsettling, tense and brilliant tease that sets the tone as immediately dark and intense. I described the film as possibly channelling similar ideas as Ex Machina and where that is true, it’s a hell of a lot darker and you can definitely feel Ridley Scott’s presence in there. 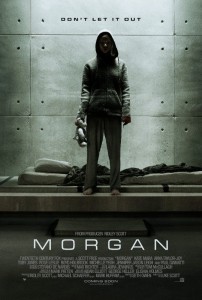 Synopsis:
A corporate trouble-shooter (Kate Mara) is sent to a remote, top-secret location, where she is to investigate and evaluate a terrifying accident. She learns the event was triggered by a seemingly innocent “human,” who presents a mystery of both infinite promise and incalculable danger.

The teaser is filled with empty rooms, coupled with tension-building zoom-outs and a disturbing soundtrack. It beautifully builds to Kate Mara’s words, “Hello Morgan” before the trailer cuts to a dramatic, bloody scene in the woods. We love it; it teases just enough without delving deeper into the story, ramping up the mystery and intrigue as well as an increasing sense of dread and horror.

Check it out below and be sure to catch Morgan when it is released in the USA on 2nd September. Morgan comes from director Luke Scott – Ridley Scott’s son – and additionally stars Rose Leslie, Anya Taylor-Joy, Paul Giamatti, Toby Jones and Boyd Holbrook.