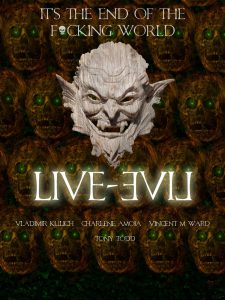 Released nearly a year ago in the UK under the title Grave Walkers, Ari Kirschenbaum’s Live-Evil will hit US VOD this Halloween, from Simian Tales.

Candyman’s Tony Todd stars in the film, which mixes a noir-esque sensibility (The first half is shot almost entirely in black and white) with ‘80s neon that evokes films like Night of the Creeps or The Video Dead. The plot concerns a cop who brings in a woman with mysterious glowing eyes after stumbling on the scene of a mass murder. In the basement jail, the strange woman preys on the minds of the cops, who one-by-one succumb to the entity’s psychic possession as the small town’s population are transformed into unstoppable undead freaks.

Live-Evil creeps onto Amazon on 31st October, with other platforms to follow soon. You can read my thoughts on the film here.