Originally titled Live Evil, director Ari Kirschenbaum’s ambitious horror mashup has been slapped with the more generic, Asda-shelf-filler title Grave Walkers for its UK DVD release. It’s an odd move, considering the film is about as non-generic a zombie film as one could hope to see. The zombie tag in fact, barely applies to this concoction of ‘80s ghoulish excess, moody noir and snappy comedy, although things do wind up with hordes of undead lumbering around the streets.

Following the lengthy opening credits that seem to take in the entire cast, we are introduced to Deputy Hancock, a remarkably casual-looking cop played with heightened levels of cool by Charlene Amoia. After taking out an ailing deer in the road, she is called to a large country house, bemoaning over her radio that she’s 20 minutes from the end of her Halloween night shift. It becomes a witty twist on the old ‘one day off retirement’ cliché, contrasting the contemporary character to the grizzled older men usually taking up the lead cop role. The joke is complete when we meet the sheriff, who is very much a grizzled older man, swigging from a bottle but handy with a shotgun.

Finding multiple bodies at the house, Hancock apprehends a woman she seems to recognise, save for the glowing eyes. Locked up in the police station’s basement jail, the entity preys on the minds of the cops, appearing to each as a person best forgotten from their respective pasts. Seeing it as his long-dead abusive father, Pete – the sheriff – pulls a gun before turning to the bottle. As the cops and other prisoners succumb to the thing’s psychic possession (receiving their own lit-up eyes in the process), Hancock and her stronger-willed compatriots must get to the bottom of the Evil, even as the town’s population are becoming unstoppable undead freaks.

Certainly an interesting film if not a consistently entertaining one, Grave Walkers establishes a unique, offbeat tone from the start. Aside from chapter headings and animated interludes featuring a demonic mask and mists of blood, the film’s first half is shot entirely in black and white, playing with a noir feel, if a heavily askew one. The twangy, smoky guitar licks that cue scenes in and out are fused with classic cop thriller funk and a sound more comparable to The Munsters theme. Add to this the modern dialogue and it is clear that the noir nods are not to be taken too seriously, as a threatening yet playful tone pervades.

When the monochrome is broken half way through, Grave Walkers becomes sumptuously colourful, with green and red lighting blanketing the frame. We also get to see those same colours glowing from the eye sockets of the by now numerous ghouls. The glorious neon is a deliberate evocation of ‘80s zombie flicks (think The Video Dead, Night of the Creeps etc), and despite the myriad influences present in the film’s visual playground, it does tread close to such retro fare in various ways from the off, the skeletal ghouls themselves even resembling They Live’s boggle-eyed aliens. As for whether or not they can be classed as zombies, the question is knowingly addressed – and the zombie genre slyly commented upon – with an amusing recurring disagreement between Hancock and another cop. The glowy-eyed buggers turn others psychically, and prefer to dispatch the living with shotguns than with teeth and hands. They provide some laughs – the biker ghouls riding their choppers slowly past are a highlight – but are still able to make for some genuinely chilling images, peering through windows or from dark corners.

The comedic aspects of Grave Walkers are handled with originality and care, and are as offbeat as the film is as a whole. Cool, energetic and crucially damn funny, Charlene Amoia proves a smart bit of casting in the lead role, making Hancock far and away the most watchable character. During the frequently boggy second act in fact, she almost single-handedly keeps 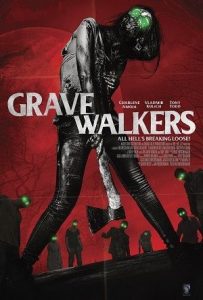 momentum going. In a fairly sizeable main cast (hence those patience-testing opening credits), there are a few characters that serve little function including, disappointingly, Tony Todd’s preacher, who is given just a few aimless minutes of screen time.

While undeniably accomplished in a visual sense, Grave Walkers gives little reason behind its artistic choices. The faux-noir feel generated by the black and white photography is something of a gag, and would have come across just as well had it not been used past the opening scene. When colour is introduced to such lavish effect, you’ll be wishing it had been brought in way earlier. It’s difficult not to admire Grave Walkers for trying something so different and it is most certainly worth a watch based on that alone. With a bit of refining and a more cohesive tying together of its many visual tricks, it would have been a real standout in contemporary undead cinema.