This New Clip from Baskin is a Beautiful Fright 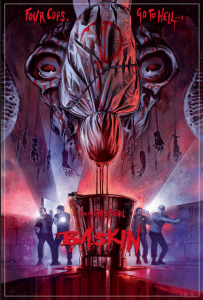 If a horror film can be beautiful and terrifying at the same time, then it’s definitely doing something right. This short clip from the Turkish shocker Baskin is filled with creeping tension and suspense, but is bathed in a glorious colourful light that makes it stunning to gaze up. Check it out below.

Baskin means ‘police raid’ which is a fitting title for a film that follows a group of police officers who stumble in to hell. The group get split-up – because this is a horror film, after all – and find themselves all alone and suffering their own personal nightmares.

Director Can Evrenol is set to receive the FANTROBIA award at this year’s FANT Bilbao Fantasy Film Festival, so this suggests that his debut is certainly something to shout about.

Baskin is one of our most anticipated films of the year and you lucky folk in America will be able to witness its brutal wonder very soon when it hits VOD and selected cinemas on 25th March. Baskin will also be screening at the upcoming FANT Bilbao Fantasy Film Festival which runs from 6-13th May in Spain.