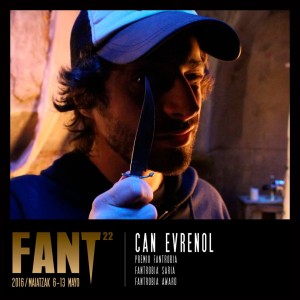 HOT OFF THE PRESS:
FANT Bilbao Fantasy Film Festival has just announced that emerging Turkish filmmaker Can Evrenol (BASKIN) is to receive the coveted FANTROBIA award at this year’s 22nd edition.

Each year, FANT acknowledges up-and-coming genre talent with the aforementioned award, and with Baskin having made plenty of waves on the international festival circuit, Evrenol is all set to join the FANTROBIA ranks alongside previous winners such as David & Alex Pastor (Carriers), Jorge Dorado (Anna) and Macarena Gómez (Shrew’s Nest). This year also marks the very first time the festival recognizes overseas talent with this coveted award.

Baskin is all set to take US audiences on a journey through sixteen different flavours of hell this March 25th, both theatrically and on VOD, and the film will be screening as part of the FANT line-up with the director in attendance.

Baskin stands for “police raid” in Turkish and, starring Gorkem Kasal, Ergun Kuyucu, Mehmet Cerrahoglu, Sabahattin Yakut, Mehmet Fatih Dokgoz and Muharrem Bayrakson, relates the tale of a five-man police squad who get a somewhat peculiar call requesting backup in a nearby village. They enter an apparently abandoned house but, as soon as the squad splits up, each member of the team starts to experience their own personal nightmares.

Running May 6th through 13th, Bilbao’s FANT Festival is not to be missed, serving up succulent slices of sinister cinema each and every year.