With the release of Scream VI just months away, Paramount Pictures has released a colourful new poster that maps the journey so far! 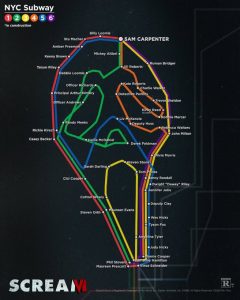 Styled after a New York City subway map, the poster turns the six films in the franchise into subway lines that form the shape of a Ghostface mask. As we know, Scream VI will see the four survivors of the Ghostface killings leaving Woodsboro behind to start a fresh chapter in the Big Apple. And judging by the recent teaser trailer, the subway will be the site of a Ghostface attack.

The poster is also packed with fun details, including the various stations being named after deceased characters. Interestingly, the line representing fan-favourite returning character Kirby Reed (Hayden Panettiere) is labelled “closed.” Kirby was last seen in 2011’s Scream 4 when she was stabbed by Ghostface and left for dead.

Scream 2022 directors Matt Bettinelli-Olpin and Tyler Gillett are back at the helm for Scream VI. The film slashes into cinemas on March 10th, 2023.