The next instalment in the Scream franchise has officially been titled Scream VI, and the first teaser trailer takes the action to the New York City subway system! 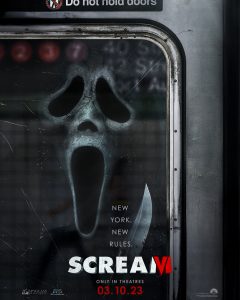 Directors Matt Bettinelli-Olpin and Tyler Gillett (Scream, Ready or Not) are back at the helm for the sequel, which will see the four survivors of the Ghostface killings leaving Woodsboro behind and starting a fresh chapter in the Big Apple. The teaser trailer suggests that the film might take place around Halloween, allowing it to plant plenty of fun horror easter eggs, including an extra wearing a Ready or Not costume!

Scream VI slashes into theatres on March 10, 2023. Check out the first teaser trailer below!