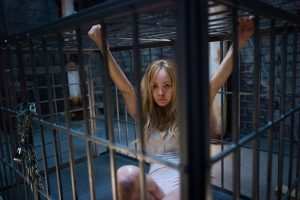 If you missed Friday’s Horror Channel FrightFest line-up announcement then, where the hell were you? There is a whole host of fantastic horror films from around the world, covering multiple sub-genres and it all takes place in London. Hooray! One of the films that is screening at the festival is Pet from director Carles Torrens and writer Jeremy Slater (The Lazarus Effect, The Exorcist – TV series).

Pet follows a lonely man called Seth– played by Dominic Monaghan – who becomes obsessed with an ex-girlfriend (Ksenia Solo) and holds her captive beneath an animal shelter. You can take a look at the images below which shows the poor woman confined like an animal in a cage. Apparently she’s not exactly what she seems, so Seth better watch out.