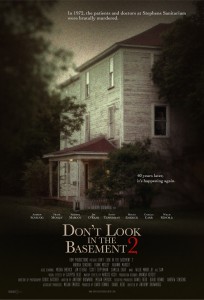 A sequel 40 years in the making, Don’t Look in the Basement 2 is set for a US home media release later this month, courtesy of LeglessCorpse Films. The film is a follow up to exploitation auteur S.F. Brownrigg’s cult 1973 grindhouse chiller, which found drive-in success in its day playing as a double-bill with Wes Craven’s The Last House on the Left.

Far from a cynical cash-in, DLITB 2 is directed by Anthony Brownrigg, the son of the original’s director, who passed away in 1996, and follows one of the few survivors of that film’s climactic massacre. A belated but pitch-perfect sequel (read our review here), DLITB 2 stars Andrew Sensenig (We Are Still Here, The Last Exorcism Part II) as Doctor Matthews, who joins the staff at Greenpark psychiatric hospital, formerly known as Stephens Sanitarium. The staff members are largely unaware of the building’s bloody history, but the arrival of former resident Sam (Willie Minor) awakens the site’s dark past, and a spate of violence begins.

Camilla Carr, who played hospital patient Harriet in the 1973 film (as well as appearing in two more of the four horror films directed by S.F. Brownrigg) returns, this time playing Emily, who runs Greenpark and harbours secrets of her own.

DLITB 2 premiered at the Dallas International Film Festival last April. LeglessCorpse has scheduled a DVD and blu-ray release for May 24th, with a VOD release to follow sometime in the summer. The 2-disc blu-ray will include a feature length documentary shot on set by Jim O’Rear, who plays Billy, one of the hospital’s porters. It will also include the original 1973 classic. It’s fantastic to see a relatively under-the-radar horror flick like this receiving such a loving release. We’ll have to wait to see whether the film receives similar treatment in the UK. Truth be told, it seems unlikely.