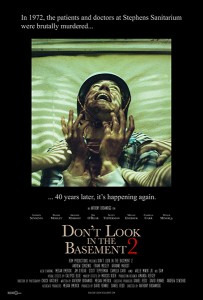 Synopsis:
40 years has passed since the massacre at Stephens Sanitarium. Now called Greenpark, its bloody history is largely unknown to its staff, not least William Matthews, a doctor newly brought in from New York. William is welcomed by fellow doctor Lucy, but receives a frosty reception from Emily, who runs the institute and assigns him his first patient, Sam. Sam survived the bloodbath all those years earlier, and seems to remember these walls all too well. His arrival awakens the building’s dark past, and blood soon begins to flow once more. Why are the patients turning on one another? What is Emily’s secret? And what really happened in that basement 40 years ago?

For a select group of horror fans, Don’t Look in the Basement 2 represents something truly precious. A sequel to S.F. Brownrigg’s 1973 drive-in classic, it is directed by his son Anthony. To those familiar with S.F. Brownrigg’s work he is a massively underappreciated talent, an auteur whose films sit among the top tiers of low-budget ‘70s horror cinema. A daunting task for his son then, to direct a follow up to what is probably his most celebrated work. Thankfully, Anthony Brownrigg’s film is not only a fitting tribute to his father, who sadly passed away in 1996, but a wonderful gift to the late director’s fans.

A brief series of opening shots detail the immediate aftermath of the original film’s brutal climax, in effect recreating that film’s final images. Though we are quickly brought forward to the present day, the ghosts from the past have followed; a constant presence lurking below the surface of the narrative. Anthony Brownrigg infuses his film with a similar sense of melancholy to that which categorises the films of his father. As we are introduced to the patients at Greenpark, their individual frustrations and troubles are deeply felt. A shocking early scene in which impatient and malicious doctor Lance aggressively bullies severe anxiety sufferer Clive in response to a request for cigarettes is heartbreaking. As in the original, the patients are well-written and believable characters almost without exception. The only one who treads a little close to becoming a caricature is Chester, who speaks only in ‘please’s and ‘thank you’s, but who we are forced to take more seriously when the violence hits.

We do get a little comic relief, in the form of double-act Billy and Bishop – the hospital’s porters – who prove genuinely amusing crowd-pleasers without breaking the film’s mood or becoming cringeworthy. Indeed, praise is due to the performances of the entire cast. As William, Andrew Sensenig never misses a beat, conveying a weight of sadness which hints at the character’s past even before he tells his story. Having only previously made brief appearances in a few TV dramas (including Nashville, The Vampire Diaries), Brady McInnes is hugely impressive and sympathetic as Clive. And then there’s Camilla Carr as “Dragon-Lady” Emily, who fans will be excited to see. A member of S.F. Brownrigg’s film ‘family’, Carr starred in three of his films, playing Harriet in the original Basement. Anthony Brownrigg’s masterstroke though, is undoubtedly in his casting of Willie Minor as lobotomised gentle giant Sam. From his arrival at the hospital, his eyes are wide with the same childlike wonder given to the character all those years ago by the late Bill McGhee, who sadly never lived to reprise the role, passing away in 2007. Minor has apparently studied McGhee’s performance obsessively, and convinces us entirely that this is the same character we fell in love with in the original.

There is another returning character of sorts, who hasn’t changed much at all. Now a hostel, the large and imposing Trinity Institute in Texas provided a starting point for the original film’s script, and is no less of a presence here. Basement 2 is broken up with frequent exterior shots of the building, filmed in low-angle with a stillness which gives it its own lifeforce. The building, like its inhabitants, is holding onto some dark secrets and there is a sense of it always watching, waiting to reveal them.

While Don’t Look in the Basement 2’s strong performances and assured direction should have no trouble drawing in viewers unfamiliar with the original, it is an absolute must for fans of S.F. Brownrigg’s ‘70s debut, who will get to feel its full power. By mirroring the feel of the original (slow build, taking time to introduce a large ensemble of characters; weighed down by a pervasive sense of sadness) without resorting to homage or repetition, Anthony Brownrigg has crafted something truly remarkable. It’s incredibly respectful to its predecessor, even when shining fresh light on that film’s mysteries with some jaw-dropping plot revelations. And then there’s Sam, and Willie Minor’s pitch-perfect portrayal. Seeing his story finally find some closure was, for this viewer, a beautiful and genuinely moving experience.

Don’t Look in the Basement 2 premiered at the Dallas International Film Festival at Midnight on April 10th 2015. Producer David Rennke has expressed hope that it will play some UK festivals in the summer but aside from this it remains difficult to say when it might see a wider release. Fans of the original cult classic in particular should be crawling over each other to see it and can rest assured that for them, this sequel is a genuine treasure. Anthony Brownrigg has created something truly special, completing a story whose original teller never got the chance to. Somewhere, his father must be proud.