Johannes Roberts (The Other Side of the Door) is set to direct an adaptation of Stephen King’s novella Hearts in Atlantis, with a script written by himself and Ernest Riera.

The film, confusingly, is not going to be a remake of the 2001 film of the same name, as this is actually based on the short stories Low Men in Yellow Coats and Heavenly Shades of Night Are Falling written by King. The new film is to be called Hearts and will be connected to the 2001 film by a character named Carol.

Stephen King’s Hearts in Atlantis is a collection of short stories; Hearts in Atlantis, Blind Willie, Why We’re in Vietnam, Low Men in Yellow Coats and Heavenly Shades of Night Are Falling. Hearts is to be based on the solo story and not the entire collection; it’s a bit of a headache if you’re not familiar with this area of King’s work. 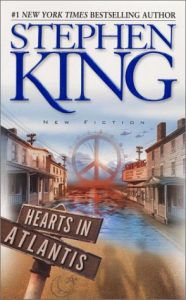 Set in 1966, “Hearts” is a bittersweet coming-of-age story about a group of college boys and their first time away from home, their obsession and self-destruction, and what it means to be an adult in a world where, in the face of a devastating war no one understands, adults can no longer be trusted.

Poor freshmen, surviving off scholarships and aid packages, become obsessed with the highly addictive – and highly vindictive – card game Hearts and find their world starts to slowly unravel. Their grades begin to fall, and one by one they flunk out at a time when life outside college meant the draft and the jungles of Vietnam.

Roberts and Riera recently teamed up to write the script for the supernatural horror The Other Side of the Door and 47 Meters Down; both of which Roberts directed. This will be their first collaboration on an adaptation and they’ve certainly jumped in the deep end by choosing a story written by such a well-renowned author.

We thought The Other Side of the Door was a solid spook-fest, you can read our review here.