THE OTHER SIDE OF THE DOOR: Film Review

Synopsis:
After the tragic accidental death of her son in India, a mother learns of a temple where a ritual will allow her to say goodbye to him as long as she obeys one strict rule. 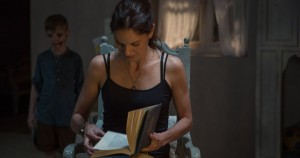 British director Johannes Roberts has been directing horror since 2001 with his self financed low budget horror ‘Sanitarium’ which bizarrely featured top cutlery mangler Uri Geller. Since then his output has been variable with his most recent ‘Storage 24’ being a moderate success.

With his previous films being UK based the director has now relocated the horror to India where a young family decide to settle only for tragedy to strike when their son dies in an accident. Unable to forget and blaming herself the death the mother played by The Walking Dead’s Sarah Wayne Callies learns of a deserted temple which has the ability to bring her son back momentarily from the dead for her to say her goodbyes as long she doesn’t open its entrance and go to…..wait for it……. The other side of the door! (see what I did there? ) So of course unable to resist the temptation she does indeed open the door and….. cue all manner of creepiness.

Starting with a scene of the demise of the young boy the grief of the mother is palpable and unlike most stage school children there is a real sense of distress at the child’s death and is a credit to Logan Creran as the child. It’s not long however before the chills begin and this is a decent little horror with the director finding his stride and taking his cue from the ‘Insidious’ franchise at times which is no bad thing and unusually using Hindu mythology for its back story before it becomes something of a haunted house / home invasion hybrid. 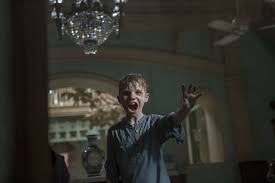 Callies is good as the mother devastated by grief and unable to shake her feeling of guilt at her son’s accidental death and ends up willing to sacrifice everything for him. With her character to the fore it’s Jeremy Sisto as her husband who quickly disappears in to the background for long stretches with little to do except to reappear for the climatic sequences. With the lad returning from beyond the grave he brings death with him as well as a load of local actors done up in loincloths glassy eyed and ashen faced solely due to them having smeared ash on their faces.

Produced by French horror maestro Alexander Aja this is a workmanlike film and should give Roberts much needed success and possibly even a franchise.