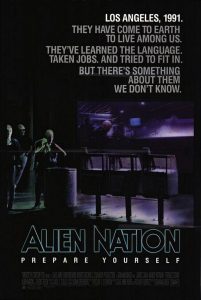 First The Toxic Avenger and now Alien Nation. The remakes never stop do they? Jeff Nichols, the acclaimed director of Take Shelter and Mud is jumping on the remake train as he signs on to direct a re-imagining of the sci-fi Alien Nation.

The original Alien Nation was released in 1988 and follows James Caan as a police officer who must team up with an alien detective played by Mandy Patinkin. Think of it as District 9 meets Lethal Weapon and you’ll be almost there.

Jeff Nichols recently impressed with Midnight Special; a fantastical drama that touched on the idea of alien entities, so it will be interested to see what he brings to Alien Nation; which disguises its racial commentary behind an extraterrestrial guise.

The new Alien Nation will be produced by Brian Kavanaugh-Jones and Sarah Greene. More as it comes!