Get Your Mops Out for Toxic Avenger Remake

A new vision of Troma’s most celebrated creation is on the way, with a remake of The Toxic Avenger reportedly in the works at Storyscape Entertainment. According to Deadline, a director has already been locked in the form of Sausage Party co-director Conrad Vernon.

The site tells us to expect a “…more grounded and mainstream” take on the riotous 1984 original, which was co-directed by Lloyd Kaufman and Michael Herz and has so far spawned three sequels. The Troma co-founders are serving as executive producers on the remake, giving it some added credibility with fans. The original script is being reworked by Mike Arnold and Chris Poole, who are known for their work on the FX animated series Archer.

In the original film, relentlessly uncool New Jersey teen Melvin constantly finds himself on the wrong end of pranks at the Tromaville Health Club, where he works as a mop-boy. After falling into a vat of toxic waste, he transforms into the super-strong, super-gross superhero of the title and stands up to his tormentors. 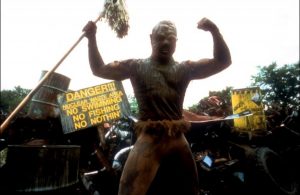 Director Vernon told Deadline: “The opportunity to re-imagine a favourite cult-classic from my high school years is an honour. Toxie is an underground icon. My favourite kind.”

Expect more news on this one as we get it.