The Inside Remake will Premiere at Sitges

Alexandre Bustillo and Julien Maury’s French shocker Inside is one of the best horror films ever made and I challenge anyone who thinks any different. The remake is to be directed by Miguel Angel Vivas (Extinction) and is high on our watch list, because not all horror remakes are that bad. Seriously. Fede Alvarez’s Evil Dead was awesome and even the remake of Martyrs was perfectly watchable.

Soon we will be able to hear the verdict of the Inside remake, because the film will be receiving its European premiere at Sitges festival which runs from 7th-16th October. As the film is a Catalan production, it’s no surprise to see Sitges as the home for the film’s premiere. Roll on October! 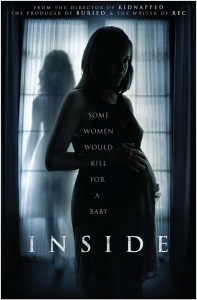 Synopsis:
Pregnant and depressed, a young widow tries to rebuild her life following the fateful car accident where she lost her husband and partially lost her hearing. Now, about to go into labour, she’s living in a remote house in the suburbs when, one Christmas night, she receives an unexpected visit from another woman with a devastating objective: to rip the child she’s carrying from inside her. But a mother’s fury when it comes to protecting her child should never be underestimated. Rachel Nichols and Laura Harring play the two main roles in this brutal and bloody hand-to-hand combat.