Here at SCREAM we would never want to be accused of not doing our utmost to nourish our readers and the horror community at large with a diet of quality Evil Dead coverage.

After what has felt like a long twenty years,  in which time we have not heard a peek from The Evil Dead, despite the evolution of Romero’s Living Dead films from trilogy to franchise,  Danny Boyle’s infuriating zombies who run, and more recently AMC’s The Walking Dead. To borrow the slogan of TDKR, it is time for all horror fans to chant “RISE” as The Evil Dead is set to do just that in UK theatres on April 19th.

So in anticipation of the finest Evil Dead coverage from British shores, all to be found in SCREAM #17 OUT NOW where Bruce talks the classics, and Fede talks remake, here is our review of the film any respectable horror fan or SCREAM reader will be skiving work to see on April 19th.

Synopsis: Take an isolated cabin in the woods, five unsuspecting protagonists, throw in a bit of night time reading: the Book of the Dead and there you have it… shit happens!

One of the burning questions the masses will be asking April 19 after experiencing what is being marketed as “The most terrifying film you will ever experience” is not only the response to this hype-ridden slogan, but also is it or is not a re-make.

Whilst for some it is, others prefer to use the term re-imagining, whilst others dismiss it as either of the aforementioned. What is certain is that this is Fede Alvarez’s take on The Evil Dead camp fire story (as described by Sam Raimi); a return to the roots of the original, cutting loose of the comedy that created the multi-tonal trilogy of films. Just as in the original any comedy is purely incidental, Alvarez wary to avoid comedy creeping in to either diffuse or lighten what is designed to be an intense and pure horror experience. 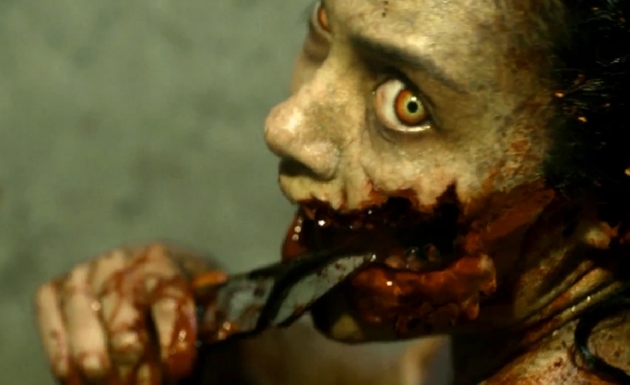 The success of The Evil Dead is more impressive in hindsight of the marketing slogan which adorned posters. Raising expectations rather than tempering them, a tactic not without risk in light of the inevitable comparisons to a cult classic by its legion of fans; who will mercilessly rip it to shreds should it be perceived as a stain against The Evil Dead’s good name.

Whilst it did not live up to the hype of being the most terrifying film, this realisation did not lead to a sense of disappointment. Instead it offered an experience to its audience that could not have been foreseen. Evil Dead is a gruelling and thrilling horror that serves up buckets of blood and gore amidst an unexpected emotional family drama. It is unexpected for a studio picture to deliver a well-conceived character drama, beneath an unrelenting “18” certified mainstream horror picture.

Evil Dead is a mature feature debut for Alvarez, who came to the attention of Hollywood when his short film Ataque de pánico! (2009) went viral. If one gripe is the slow pace of the opening, this can only be contributed to Alvarez’s focus to the narrative’s set-up.

Evil Dead’s conflict and resolution carry weight because of the patient attention to detail of the first act, introducing to us the characters, their family drama and past tensions. It serves to immerse us in the characters as we gradually grow closer to them, learning the intimacy of their relationships before we are forced to watch them suffer helplessly. A young writer-director perhaps, but Alvarez clearly appreciates that no film becomes a gruelling experience until the third act is underway. The construction of the group dynamic, the nurturing of the audience’s empathy and sympathy is handled expertly, and hence creates the ultimate pay-off – a gruelling horror experience imbued with emotion. 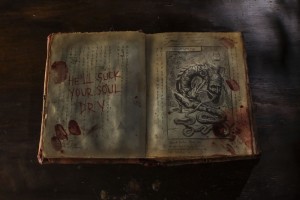 Equally, Alvarez deserves credit for exploiting a convention that serves horror well, and from which derives suspense and dread – the tensions between the protagonists. Long before these five characters are aware of the spiralling nightmare they will become embroiled in, such narrative tension serves to create a sense of unease for the film’s audience. We have the skill of foresight, and we know that united they will stand; divided they will fall. But destiny plays a key part in this film, depicted through the tarot cards that identify each of the characters roles in the story.

Alvarez whether intentional or not, has given his Evil Dead film a double identity if it is indeed a remake. Mia drenched in blood, the cabin in the woods, the dynamic between brother and sister, almost brands it as a re-imagining of the classic fairy-tale Little Red Riding Hood. So in one glance it is a remake or re-imaging of a cult horror classic, but by it’s conclusion it may strike you more as a re-imagining of a classic fairy-tale in the shell of a zombie horror picture. Either that or it is a cynical tale where good deeds are the proverbial “nail in the coffin” of a family drama in the shell of zombie horror picture. This is a film that defies any label to identify it. Rather it is Fede Alvarez’s The Evil Dead.