Get Ready to Netflix and Kill with Bates Motel 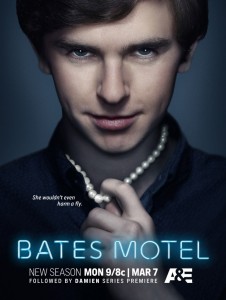 A new teaser has been released for Season 4 of Bates Motel, which is set to re-open its doors next month. This sneaky peek wants to romance us in to catching up with the show on Netflix –if we haven’t done so already, of course – as we see Norman’s plans for Valentine’s Day.

There may be a lot of death in Bates Motel, but romance certainly is not dead. This teaser was unleashed on Valentine’s Day and sees Norman Bates (Freddie Highmore) and his mother Norma (Vera Farmiga) getting ready for a romantic evening; or are they? As Norman’s mental state is slowly deteriorating, we can assume this is all in his dead.

Synopsis:
This season Norma becomes increasingly fearful and desperate, going to great lengths to find Norman the professional help he needs. This further complicates their once unbreakable trust while Norman struggles to maintain his grip on reality. Sheriff Romero (Nestor Carbonell) once again finds himself drawn back into Norma and Norman’s lives. Will things finally heat up between Norma and the other man in her life, Sheriff Romero, and just how much further will he go to protect her?

Bates Motel is about to cross paths with Psycho and there’s already been a tease of the infamous shower scene, so make sure to tune in to Season 4 when it airs on A&E on 7th March.