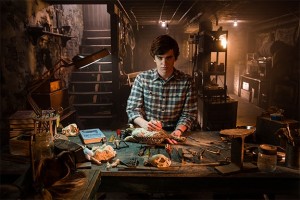 A&E have released the first teaser trailer for the upcoming fourth season of Bates Motel, and it seems more than a little familiar, screaming its way into, apparently, that most iconic of scenes from the film that inspired the series. Does this mean the new season will bring us up to date with the events of Psycho? Will we see a modern-day re-imagining of the part of the story that introduced Norman Bates to the world back in 1960? We’ll have to wait and see, but it’s one hell of a tease.

A prequel to Hitchcock’s classic shocker, albeit in a contemporary setting, Bates Motel follows the teenage Norman Bates (played by Freddie Highmore) and details his odd relationship with his mother Norma (Vera Farmiga).

As well as hinting at the classic shower scene, the new teaser ends with possibly the most quoted line from Psycho: “We all go a little mad sometimes.”

The season 4 premiere will hit US screens at 9pm ET on A&E, and is followed at 10pm by the pilot episode of Damien, based on 1976’s The Omen.