A new poster has been unveiled for the first 3D found footage film Found Footage 3D, which now has fitting artwork to go with its apt title. It looks suitably old-school with its classic skull design and the red and blue colours are wonderfully reminiscent of the traditional 3D glasses that are now a thing of the past. 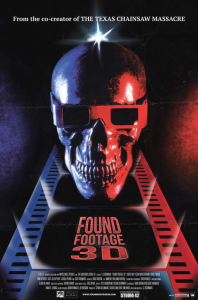 We thought the film was brilliant; proving that there is plenty of life in the sub-genre of found-footage and that 3D can be an exquisite amount of fun. You can check out our 4-star review of the film here which comes from writer-director Steven DeGennaro and stars Carter Roy, Alena von Stroheim, Chris O’Brien and Tom Saporito.