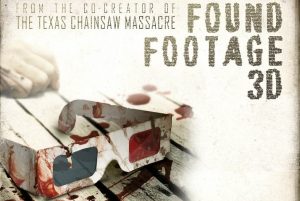 The found footage genre is like the yeast spread, audience either love it or loathe it entirely. Fortunately in my case I don’t mind it at all. It might be a cheap form of filmmaking but when it is done right it can make the viewing experience that more immersive. But, what happens if you combine all the usual tropes of the found footage film with the perils of 3D? Well in the case of Steven DeGennaro’s Found Footage 3D the end result is simply amazing in almost every way possible.

Arguably a found footage film for people that hate the genre, Found Footage 3D (FF3D henceforth) does for the sub-genre what Scream did for slashers. I may be viewing the world of Found Footage 3D through the rose tinted lenses of my green and magenta tinted anaglyph glasses but FF3D offers audiences 108 minutes of side-splitting comedy and super effective scares. As you can imagine, FF3D is a self-aware gem that takes great pride in poking fun at the genre on one hand whilst turning all expectations upside down.

The plot is very simple. A team of filmmakers go to a location with the intentions of making a found footage film only to find themselves in one. Sticking closely to the rules of the found footage film whilst shooting with an expensive pair of 3D cameras things quickly go south and then it’s all shaky cam, endless arguments and high-pitched screams. However, as director DeGennaro has clearly a lot of respect for the genre and works incredibly hard to convince his audience just how effective the sub-genre can be.

The cast are great and make it easy for the audience to connect with the film. Their collective performances provide a roster of characters that you will love to hate. Carter Roy plays Derek, the self appointed leader of the group. His performance embodies all the worst qualities of practically every lead in a found footage film. He’s brash, rude, selfish and completely deserving of what’s coming to him. Likewise, Alena von Stroheim nails it as the bruised leading lady giving the audiences more than a few headaches with her banshee screams and stupid decisions. But don’t let this worry you as the true hero of the movie is none other than the evil entity at its core.

I refuse to have spoilers in this review so believe me when I tell you that this movie is a ton of fun. There’s not only some incredible gags along the way but there’s also a few jumpy moments that had me literally leaping out of my seat. Throw in some very effective uses of 3D and bonus points for Scott Weinberg’s cameo, FF3D delivers something that can only be described as totally entertaining. 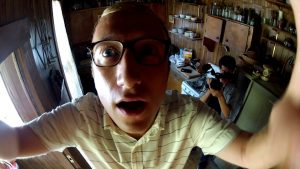 Will FF3D change the minds of found footage haters? Probably not considering a very stomach turning third act caused by DeGennaro’s questionable use split-screen (this bit gave me a headache). But if you’re willing to give FF3D a go like I did then you will no doubt get something positive out of the experience and take great pleasure in screaming with laughter one minute then screaming with terror the next. Either way, you’re best to have some fresh underwear at hand by the time the end credits roll.