A photo from the set of Alien: Covenant has been posted on Twitter with the caption “Creator. Creation.” It shows director Ridley Scott and a blurry David (Michael Fassbender) in the background. As a sequel to Prometheus, the caption works well at throwing back to the first film, as well as touching on the myth of Prometheus itself and even Frankenstein. 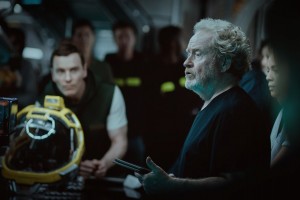 After the death and destruction that was present in the previous set photos, it’s nice to see something a little less nightmarish. Alien: Covenant will mark the beginning of a new Alien trilogy, and will follow the crew aboard the ship ‘Covenant’ who land on a dangerous world that has only one inhabitant: the synthetic David.

Be sure to catch Alien: Covenant when it lands on 6th October 2017.