FilmRise Acquires Let Me Make You a Martyr 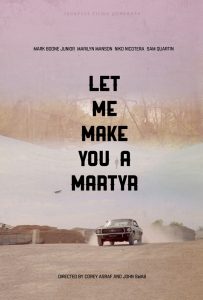 FilmRise has acquired the rights to Let Me Make You a Martyr, an action horror that follows two siblings who fall in love and plot to kill their abusive father. We caught the film earlier this summer and we thought it was pretty great. It boasted a few great performances and we particularly enjoyed the sun-baked setting which made the perfect backdrop for the blistering events.

Let Me Make You a Martyr comes from first-time directors Corey Asraf and John Swab, and is loosely based on their short film titled Judas’ Chariot. The film features goth rocker Marilyn Manson as the hitman Pope and he is joined by his Sons of Anarchy co-star Niko Nicotea, Mark Boone Junior, Sam Quartin and Michael Potts.

Let Me Make You a Martyr should be released on digital platforms at some point in 2017. Check out our full 4-star review here.