LET ME MAKE YOU A MARTYR: Film Review

The low-budget, exploitation-tinged Let Me Make You a Martyr opens with two mean bastards paying a visit to a fella with blood on his walls and desperation in his voice. All hands hold guns, and one of the visitors, played by onetime AntiChrist Superstar Marilyn Manson, calmly explains through the door that they must take the man’s life in place of their intended target who lies dead offscreen. So far, so gritty crime thriller. And on the surface, there’s not a whole lot of originality in co-directors Corey Asraf and John Swab’s greasy drama and yet, it’s difficult to take your eyes from.

Following the straight-to-it opening scene, we are introduced to Drew Glass (Sons of Anarchy’s Niko Nicotera), cuffed and in police custody. Quizzed about the events that led to his arrest, he begins his story. Returning to the town he grew up in, Drew sees the same old demons ruling the lives of everyone there; hard drugs, child abuse and premeditated murder. Together with his adopted sister/lover, he hatches a plan to knock off their abusive adoptive father/local crime lord, Larry. But Larry knows what’s coming, and hires cold-blooded hitman Pope (Manson) to kill Drew. 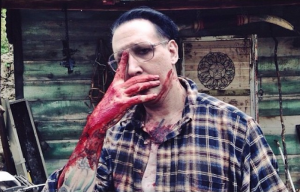 LMMYAM is the feature debut of Asraf and Swab, and loosely follows their 2012 short Judas’ Chariot. On little collective experience the pair have crafted a striking and somewhat mesmerising piece of work that makes effective use of its cast and the Tulsa suburbs where it was shot. The action is relentlessly sun-baked, and you can feel the heat blistering from the screen.

As Drew, Nicotera is a quiet centre to the film, albeit one filled with bad memories and suppressed hate. Fellow Sons of Anarchy regular Mark Boone Junior brings his entire look from that show to play Larry, as well as his gruff composure. It says something about his performance that while we are invited to loathe the character, Larry is too layered and believable to provoke such a base response. His demeanour remains consistent as he shifts smoothly from pensive and calculating to enraged and panicked.

You’ll struggle to find anyone who has Manson pegged as a great actor, but his directors are careful not to overstretch him here, and the hidden violence in Pope seethes beneath a wholly composed exterior. A standout moment occurs when Larry approaches Pope at the hitman’s home to seek his services. It takes nothing more than Pope taking a step towards Larry for the crime lord to back away in terror, absolutely aware of the killer’s reputation; if Larry is the king among those he deals with daily then in this scenario, Pope is God. The standout performance however, comes from relative newcomer Sam Quartin, reprising her role as June from Judas’ Chariot. She invites a deep sympathy to the tragic character, with a layer of stoic determination barely covering up a life of sadness and regret. June’s quiet acceptance of the daily struggles she must endure in order to get a fix, or even just a day without violence, gives her a strength and dignity, as she refuses to relent to her life’s many obstacles, heroin addiction aside.

As Drew begins his tale, a succession of scenes that cut abruptly into one another lend the film a train-of-thought feel and sense of barely recalled storytelling that fits the wraparound scenes well. It also makes us think that we are in for a complex, interwoven narrative that will put our concentration to the test. Trying to focus on and file away all aspects of the plot from the off is unnecessary however, with a number of scenes and characters serving more to set a wider scene, and expand on the world presented. This element is nicely acknowledged back in the interrogation room, with the interrogating officer pushing Drew to stick to the more important details. In this respect, LMMYAM is a film to be drank in and absorbed, rather than the chin-stroker it initially appears to be. 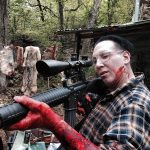 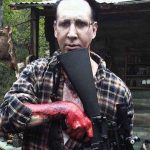 Let Me Make You a Martyr is set in the mid-nineties and in many ways, it feels like it was made then too. Almost everything about the film – the disjointed storytelling, eye-for-an-eye criminal violence, articulate scumbags, sweaty aesthetic etc. – exudes ‘90s cool, and puts it alongside the wave of stylish Tarantino-esque flicks that followed in Pulp Fiction’s wake (think Two Days in the Valley or Love and a .45). There’s a sense of violence to the film that is wholly unmatched by actual onscreen bloodshed, but is instead conveyed by startling edits and the rage emanated from a number of the characters. Asraf and Swab’s debut is a gripping and visually striking crime drama that takes you on a journey with no predictable outcome. While it is told in a familiar manner, it has a rhythm and energy all its own, and will leave you a little unsure of what you have just experienced.