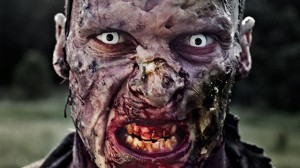 We are thrilled to report that Australian independent zombie feature, Wyrmwood has now secured US Distribution through IFC Midnight and Canadian Distribution through Raven Banner. Penned by brothers Tristan and Kiah Roache-Turner, with the latter on direction duties, the film is touted as a Mad Max/Dawn of the Dead crossbreed.

Speaking with SCREAM during this year’s Fantastic Fest, Tristan commented: “We’d made a few short films and we always knew we wanted to make a feature length film and we just felt like we were ready to do it … We planned to do something with things like Peter Jackson‘s Bad Taste in mind and also Evil Dead which was another massive influence. Then we had this classic genre look with Mad Max and I think Australia is very well known for being the country that almost spawned the post-apocalyptic genre. We really wanted to see it done again and no one had really done that since kind of the ’80s … We kind of mushed all these ideas together and out came Wyrmwood four years later.”

Whilst no release date has been confirmed, Raven Banner and IFC Midnight intend to unleash the foul-breathed zombie hordes on the same day. Wyrmwood stars Jay Gallagher, Bianca Bradey, Leon Burchill, Keith Agius and Luke McKenzie and you can read our flattery for the film right here: (http://www.screamhorrormag.com/wyrmwood-film-review/).

For now we’ll leave you to savour the latest trailer for the film just in case you haven’t yet seen it: