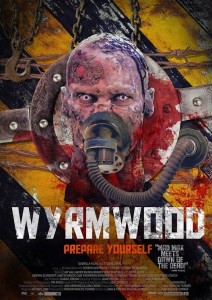 Synopsis:
Barry is a talented mechanic and family man whose life is torn apart on the eve of a zombie apocalypse. His sister, Brooke, is kidnapped by a sinister team of gas-mask wearing soldiers and experimented on by a psychotic doctor. While Brooke plans her escape Barry goes out on the road to find her and teams up with Benny, a fellow survivor – together they must arm themselves and prepare to battle their way through hordes of flesh-eating monsters in a harsh Australian bushland.

Despite pitting audiences against zombies with a biting case of halitosis Wyrmwood reeks of minty-freshness in what was a sadly decomposing horror sub-genre, until now.

Wyrmwood’s poster describes the film as a Mad Max/Dawn of the Dead crossbreed and that’s not far off the mark. It certainly embraces the Mad Max vibe with its gritty doomsday atmosphere as the resourceful survivors, dressed from head to toe in protective sportswear, cruise around in a homegrown fortified truck.

Dawn of the Dead similarities are somewhat harder to find with Wyrmood having more in common with the likes of Land of the Dead and particularly Diary of the Dead. Director Kiah Roache-Turner drastically improves on the latter though by steering clear of found footage in favour of atypical camera angles and frenetic motion. Savvy and frugal use of both POV and extreme close-up footage works a treat thrusting viewers slap bang into the zombie line of fire making the whole thing all the more rewarding.

Camera direction aside, what sets Wyrmwood apart from its zombie predecessors is the addition of more than the odd inspired zombie twist. Any further explanations would be considered spoilers so the less said here the better.

Whilst the film is hard to fault, a few absurdisms feel slightly overplayed but these are few and far between and never outstay their welcome. The chemistry between the protagonists is almost perfect and, bar the odd sub-par joke, banter between the survivors provides a more than welcome dose of comic-relief amidst the mayhem.

Wyrmwood is a frenetic and exquisitely constructed film that plays homage to cult living dead films whilst confidently breaking away from by-the-book zombie concepts. This newfangled approach makes it more than worth a zombie fan’s while.