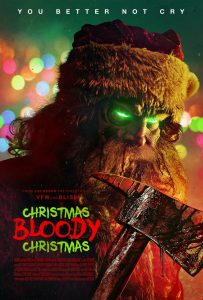 In the film: “It’s Christmas Eve and fiery record store owner Tori Tooms (Riley Dandy) just wants to get drunk and party, until the robotic Santa Claus at a nearby toy store goes haywire and makes her night more than a little complicated.

“Santa Claus begins a rampant killing spree through the neon-drenched snowscape against a backdrop of drugs, sex, metal and violence, ultimately forcing Tori into a blood-splattered battle for survival against the ruthless heavy metal Saint Nick himself.”

Christmas Bloody Christmas releases in theatres and on Shudder on December 9th. Check out the trailer below for a taste of the holly jolly hell that robo-Santa will soon unleash!