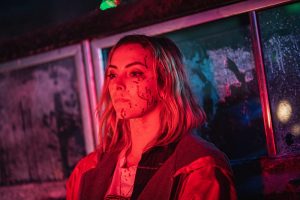 That’s not a spoiler, by the way: Christmas Bloody Christmas lays its cards on the table before the opening titles have even appeared. Through a quick bit of channel-hopping, we learn that decommissioned killbots developed by the U.S. Army have been converted into mall Santas (just go with it). And one such robo-Santa happens to be stationed in the local toy store of the small town where our story takes place.

We’re then introduced to record store owner Tori (Riley Dandy) and her employee Robbie (Sam Delich) who have the kind of will-they-won’t-they relationship that would make any HR professional nervous. Even before ol’ Saint Nick starts staking them, the pair’s chemistry makes them entertaining to follow as they drink, flirt, and talk horror and music. Dandy is the standout here, conveying strength and wit with just enough vulnerability to remain retable. She’s the perfect final girl and she needs to be, because Tori is in for the fight of her life against the kind of adversary that doesn’t stay down for long.

The production invested heavily in its killer and it shows. The robotic Santa was created by Josh and Sierra Russell, who were also behind the Cenobites in this year’s Hellraiser reboot, and what they put together perfectly balances spectacle with nostalgic silliness. The final confrontation allows us to truly bask in the effects as Tori uses everything in her arsenal to stop an unstoppable killing machine that would give the Terminator a run for its money.

That battle takes place in a neon-drenched space dripping with glow paint, a signature of Begos’ films. However, the director mixes up the setting enough to keep things fresh and interesting, moving from the record store to a bar, home, police station, and beyond. The use of 16mm film also gives the production a deliciously grainy look, heightening the sensation that we’re watching a 70s exploitation film—just one that somehow saw the future and has strong opinions about Pet Sematary 2.

Clocking in at just over 80 minutes, Christmas Bloody Christmas is a film that does what it says on the tin, wasting little time getting to the robo-Santa massacre before pushing its ridiculous premise to the max. What started life as a rejected Silent Night, Deadly Night pitch carves an identity of its own while still slotting perfectly into any holiday horror viewing schedule. The film is coming to theatres and Shudder in time for Christmas, and genre fans will certainly want to unwrap this delightfully gory gift.