A brand new poster has been unveiled for the D-Day horror Overlord. If you need reminding, it’s NOT a Cloverfield sequel or spin-off, so you can get that out of your heads.

The poster is simple and striking, emphasising the film’s intensity without giving anything away. With JJ Abrams and Bad Robot involved, we can’t help but be excited. Overlord will be directed by Julius Avery, the director of 2014’s Son of a Gun. 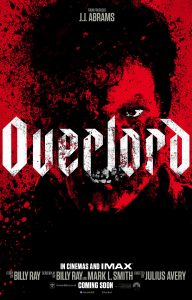 Overlord is set on the eve of D-Day and will follow a group of American paratroopers as they realise a Nazi-occupied village may have more going on than meets the eye. JJ Abrams previously called the film “crazy”, so we’re very much looking forward to it.

Check out the poster and be sure to catch Overlord when it is unleashed by Paramount on 26th October 2018.