Lin Shaye is journeying back in to the dark and eerie world of the Further in the fourth instalment of the impressive and entertaining Insidious franchise. You can check out the first image from the film below, where Line Shaye holds a lantern with Tessa Ferrer’s character Aubrey, a newcomer to the Insidious world. 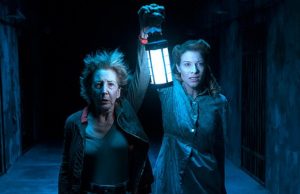 There is no official word on what route Insidious: Chapter 4 will take, but Lin Shaye recently stated that we will be getting a closer look at the life of Elise, including being introduced to her parents. Actress Hana Hayes (Mercy) has been cast in the role of teenage Elise, so expect to be taken back to the beginnings of Elise’s supernatural powers.

Insidious: Chapter 4 will be released on 20th October 2017 and will be directed by Adam Robitel (The Taking of Deborah Logan). He directs a script written by Leigh Whannell.