One of the most interesting horror releases of the year has to be Antrum: The Deadliest Film Ever Made, which just came out on VOD after premiering at the Brooklyn Horror Film Festival in 2018. You can read more about the film here, but in essence, Antrum is presented as a real “lost” and supposedly cursed horror flick from the late 1970s, recently rediscovered and watched at the viewer’s own risk. And in true 70s fashion, it will soon be getting an officially licensed VHS release—complete with an authentic 4:3 aspect ratio. 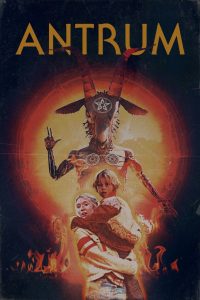 Antrum’s limited edition VHS run will be released on November 22nd, 2019. Only 50 copies will be made, with each tape featuring recently commissioned artwork by Vasilis Zikos. Also included is a letter and introduction from directors David Amito and Michael Laicini, along with a liability waiver. You have been warned…

“Watching Antrum is a dare,” executive producer Eric Thirteen told us exclusively earlier this year. “People say the film is cursed. It’s been shared as an oddity between a lot of very strange filmmakers. I don’t believe it’s supernatural… but I’ll definitely say this. I know some people who’ve seen the movie that have lost their minds.”

If you don’t want a cursed VHS tape on your shelf, or you just can’t wait until the 22nd, Antrum is available now on VOD.