“Deadly” Movie Antrum to Curse Theaters and VOD This Autumn

For a while now, whisperings of a supposedly cursed horror movie have been circulating film circles. Rumour had it that screenings would result in horrific accidents, chaos, and even death. The film itself was said to be lost… along with the filmmakers.

That film was Antrum. Supposedly filmed in the 1970s, it centres around two siblings who, following the death of a beloved pet, perform an occult ritual in the woods that unleashes something horrific on the world.

Are the rumours true? Well, you’ll soon be able to find out for yourself with the release of Antrum: The Deadliest Film Ever Made, a film containing the supposedly cursed feature. Written and directed by Michael Laicini and David Amito, this film will finally reveal Antrum to the masses, bookending the feature with segments discussing its sinister history.

“Watching Antrum is a dare,” executive producer Eric Thirteen told Scream. “People say the film is cursed. It’s been shared as an oddity between a lot of very strange filmmakers. I don’t believe it’s supernatural… but I’ll definitely say this. I know some people who’ve seen the movie that have lost their minds.”

The truly brilliant part? Antrum was written last year. All of it. Including the central feature itself, which is artfully crafted to look and feel like one of those gorgeous European horror flicks from the 70s.

This sense of authenticity is all part of the film’s deeper exploration into how and why we let horror movies frighten us. As, it seems, are the creepy occult symbols and flash-frame footage that have been spliced in for the ultimate subliminal trip. Even knowing the truth about it, part of you will wonder if it’s safe after all.

“I never know if Antrum is the Necronomicon or House of Leaves,” says Thirteen. “And really, that’s probably what’s so scary about it.”

Thirteen, who also worked as an executive producer on Rob Zombie’s 31, first saw Antrum at the Brooklyn Horror Film Festival in 2018, where his own short horror film Disposition was screening. He became fascinated with the film and wanted to share it with a wider audience, negotiating a deal with Uncork’d Entertainment to distribute the picture. The allure of a film that you’re not supposed to watch was too strong to ignore. 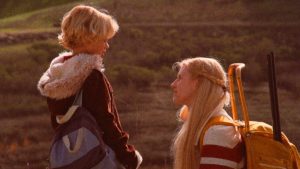 “In truth, cinema is riddled with curses,” says Thirteen. “Blair Witch followed me home. I don’t know that I enjoy Cannibal Holocaust but I keep watching it. Videodrome was a special obsession…I couldn’t stop thinking about the signal. I wanted to live surrounded by TVs playing Samurai Dreams on a loop. I think these are the curses of cinema. The ways these ideas can haunt us, it’s more real than any ghost.”

Antrum will receive a limited theatrical release before coming to VOD services this autumn. Watch it, if you dare…