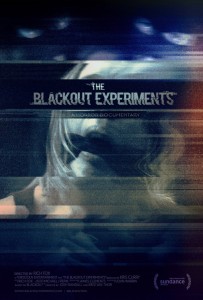 The annual Sundance Film Festival will be kicking off on 21st January and we are, obviously, most excited about the Midnight line-up which showcases the more ‘challenging’ viewing experiences. Among a great set of films is The Blackout Experiments, which follows a group of friends who discover ‘Blackout’ a psychosexual horror experience that is not quite as fun as it sounds.

You can check out a new poster for the film below, which emphasises the blurring of reality and fantasy that the group will suffer during the experiments. It also teases the film as a ‘horror documentary’ and suggests that we’re going to be witnessing some REAL horror here. How much, however, is yet to be seen. There is a slight teaser up at the film’s website, which you can check out here.

The Blackout Experiments definitely has an intriguing premise and there is an air of curiosity surrounding it. Much of the details about it are being kept under-wraps; there’s not even an official cast list. What we do know is that the film comes from director Rich Fox and will premiere at Sundance over the next few days, so keep an eye out for those early reactions.