Zombies, Vampires & Aliens in Trailer for Freaks of Nature 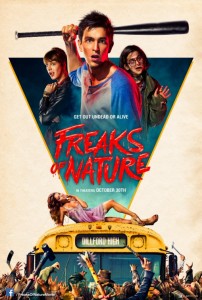 There’s a monster for everyone – unless you’re in to werewolves – in the trailer for horror-comedy Freaks of Nature and it looks bloody brilliant. If you like your horror gore-some and your comedy extremely silly, then we think you’re going to love this red-band trailer which bares all.

Synopsis:
In Freaks of Nature, we welcome you to Dillford, where three days ago, everything was peaceful and business as usual: the vampires were at the top of the social order, the zombies were at the bottom, and the humans were getting along in the middle.  But this delicate balance was ripped apart when the alien apocalypse arrived in Dillford and put an end to all the harmony. Now it’s humans vs. vampires vs. zombies in all-out, blood-sucking, brain-eating, vamp-staking mortal combat – and all of them are on the run from the aliens.  It is up to three teenagers – one human, one vampire, and one zombie – to team up, figure out how to get rid of the interplanetary visitors, and try to restore order to this “normal” little town.

Freaks of Nature comes from director Robbie Pickering and writer Oren Uziel (22 Jump Street), so you can see where the comedy influence has come from. It does look like it’s going to be ridiculous, self-aware fun and if you really want to see the most unlikely of people coming together to save the world, then this is the film for you.

Freaks of Nature stars Mackenzie Davis, Ed Westwick, Joan Cusack, Vanessa Hudgens, Bob Odenkirk, Pat Healy and a heap of others. The film is due to hit cinemas in the USA on 30th October 2015 and in the UK at some point next year.