Zombies Take to the Tracks in Train to Busan Trailer

An action-packed trailer has been unleashed for Train to Busan, a Korean horror-thriller that sees a zombie virus break out on a train from Seoul to Busan. It’s bursting with blockbuster moments and explosions that could rival Hollywood, so it is remarkably different to the films you may typically associate with Korea like Oldboy, I Saw the Devil, A Tale of Two Sisters etc.

Synopsis:
A group of terrified passengers fighting their way through a countrywide viral outbreak, trapped on a suspicion-filled, blood-drenched bullet train ride to the Safe Zone. 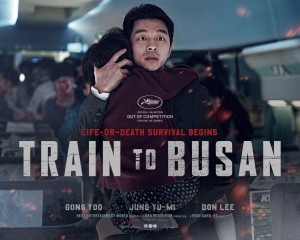 I love a good action thrill-ride, so I’m extremely excited to see what Train to Busan has to offer. The trailer captures the spirit of classic 90s American blockbusters like Speed and Con Air as the characters are faced with a dramatic and deadly race against time. The addition of zombies steers the film in a more horror-centred direction, however, throwing in the intensity of 28 Days Later and Dawn of the Dead. Count me in!

Train to Busan comes from director Sang-ho Yeon (The King of Pigs, Seoul Station) and was recently acquired by Well Go USA, so will be released in the USA on 22nd July 2016.