Is Zombieland 2 Finally Shooting in August?

Reports on a number of casting sites seem to suggest that Zombieland 2 is set to start shooting in Atlanta as soon as August.

Back in 2014 it was reported that Sony had hired The Expendables writer Dave Callaham to pen a script under the supervision of Zombieland director Ruben Fleischer, but they’ve kept pretty quiet about it ever since. A couple of months back, star Jesse Eisenberg told EW that “…they’ve been trying to do it for a while, and I know they’re trying to figure out exactly what will occur in it,” adding, “I’m sure everybody would be happy to do it if it happens and it’s good.”

While the casting site reports are far from official confirmation, Sony did flash up a Zombieland 2 title at Las Vegas’ CinemaCon earlier this month when announcing their upcoming projects, and it does seem to be one they’re not keen to step away from. 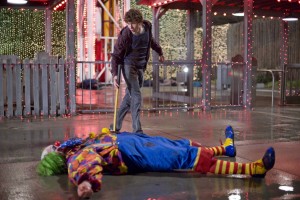 The big question of course is whether they can entice back the 2009 original’s main cast, all of whom are pretty big deals nowadays. Eisenberg certainly seems up for it, but matching his schedule with those of Emma Stone, Abigail Breslin and Woody Harrelson is an unenviable task to say the least.

Whatever these reports mean, you can be sure we’ll keep you up to date on this one.