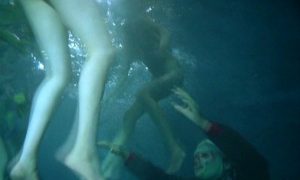 Ten years after being gunned down during World War II and thrown into a lake with a dark past, a platoon of Nazi soldiers rise again to seek vengeance on a small French town and the Mayor who had them killed.

Directed by that prolific master of Eurosleaze, Jean Rollin, 1981 cheapo Zombie Lake checks most of the boxes you’d expect, but sits well within the lower echelons of the director’s work. It speaks volumes for the film’s overall (lack of) quality in fact, that Rollin disowned it, insisting on hiding behind the pseudonym J.A. Laser. Perhaps it’s for the best then, that he did not live to see his film restored, remastered and looking better than it ever has before.

At the centre of the plot is an undead soldier’s attempts to rebuild the relationship with his daughter Helena, who was just days old when he was shot and killed. Their interactions are intended as tender, heartfelt moments but the sight of the green-faced soldier (whose neatly parted hair has remained perfectly in place after a decade at the bottom of a lake) staring down at the smiling girl with boggling eyes and a blank expression is just too much to take seriously. The zombie makeup elsewhere amounts to little more than some green face paint and scraps of green paper haphazardly stuck on the actors’ faces. The gore scenes too, are lazy, rushed and laughably unambitious. By the time of the film’s release, the Italian zombie craze was well underway, and with the high watermarks established by the hardcore gore of 1980’s Zombie Holocaust and Lucio Fulci’s splatter epics, it is baffling how tame Rollin chose to make his kills. Victims stand limply, waiting for the zombies to close in and when they do, they simply nuzzle their prey’s neck a little, dribbling out some watery blood.

Rollin attempts to enliven the tedious script (co-written by Jesús Franco, also under an assumed moniker) with liberal doses of female nudity, and the film’s opening invites us to ogle every inch of a young woman taking a naked dip in the lake, before she is dragged under by one of its long-dead inhabitants. It’s amusing for its shameless lack of subtlety, although as the film progresses, it begins to seem very much as though Rollin simply couldn’t give a shit. A later lull in nude scenes is swiftly halted when the members of a female basketball team dutifully arrive at the lake, strip off and frolic with each other with wholly unconvincing camaraderie, before their inevitable deaths.

It is that lacklustre approach to violence though, that proves the nail in the coffin for the film, as just a couple of schlocky set pieces would have enlivened this zombie borefest a treat. And that really is all it would have taken, as for fans of trashy Euro-zombie romps there are sparse moments to enjoy here. The zombified platoon will make you titter more than once, but does strike quite an image as they stumble from the lake (as they do multiple times, inexplicably returning after each batch of kills, only to emerge almost immediately for more). There’s much unintentional hilarity, from a fumbled, distinctly unerotic sex scene that goes on and on, to a clearly breathing corpse, to Helena’s instant fondness for her green-skinned, bug-eyed zombie Dad, and that’s before we even reach the zombies’ eventual collective demise. Despite the town’s Mayor’s (Franco regular Howard Vernon) repeated insistence that the zombies’ cannot be killed, the climactic solution is hilariously simple, and fittingly unspectacular. 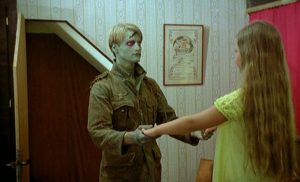 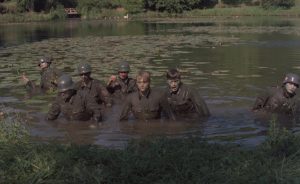 More or less entirely devoid of tension, intrigue and horror, Zombie Lake is nevertheless fun at times, but ultimately something of a chore to sit through, even for fans of Rollin’s brand of Eurosleaze. Often criticised as being a poor copy of Ken Wiederhorn’s far superior Shock Waves, the film is broadly uninspired, and could be saved by its silliness were it not so unrelentingly slow.