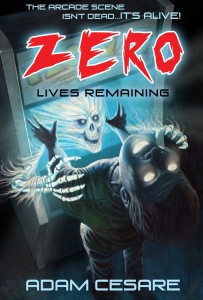 Adam Cesare’s Zero Lives Remaining really starts off with a bang. I don’t know if I’ve read about someone dying in that particular way before. It’s awesome! I’m getting ahead of myself though. As you can tell from the cover, this book is steeped in nostalgia for the old arcade days. Events take place in the aptly named Funcave.

Following the initial death of the arcade pizza chef, Robby Asaro, during the arcade hey day in 1989, we skip forward to the present. Lots of things have changed but the old faithful arcade machines are still getting used by the gamers who prefer their games as they used to be. One of those is 18-year-old Tiffany Park.

Robby Asaro is still in the arcade. Following his death, he became a ghost, or rather a conscious electrical current (which immediately makes me think of Wes Craven’s almost-classic, Shocker). Robby is currently living in arcade machines, depositing ectoplasm (another fun eighties reference). He watches over the machines and those who come into the arcade. Robby is particularly fond of Tiffany since she’s visited the arcade over many years. Plus she’s a good person and skilled gamer. When she gets attacked, Robby kills to protect her. But he finds out that ghosts suffer consequences for killing. He’s not how he used to be, and is now infected with the malevolent force of the one he killed. Tiffany and a gang of other arcade regulars find themselves trapped inside. It’s a fight for survival from that point on.

There’s essentially a soundtrack given to accompany the book, as the author reveals what’s playing on the floor, and it’s full of eighties classics. After the nostalgic arcade build up things really get crazy, including possession and killer worms. The violence and gore is over the top and fun – very fitting for the tone of the book. Some of the inventive and fun kills in the book could have been the work of Tom Savini himself. We have limb dismemberment, a Fulci-esque eye popping scene, and much more.

All told, this is a fun novella that doesn’t take itself too seriously but basks in the nostalgic setting and really makes it work.