Synopsis:
A group of survival game enthusiasts become stranded in a forest then forced to defend themselves for real after being hunted and attacked by a gang of weapon-wielding psychopaths. 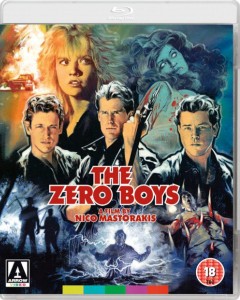 This mid-80s action horror from director Nico Mastorakis (Edge of Terror, Nightmare at Noon, Ninja Academy) ambitiously blends tropes from both genres to befuddling effect yet fails to meld for a satisfying whole. The A-Team-like opening credit sequence and gun-toting set-up, coupled with a punchy battle-hungry score by Stanley Myers and Hans Zimmer, evoke a style synonymous with an era of generic macho action fodder, while also infusing hokey nostalgia for those who grew up on grimy teen punk flicks. Films likes Walter Hill’s The Warriors, Class of 1984, Savage Streets, the Cannon Film canon and numerous slice ‘n dice horrors. Yet The Zero Boys saunters through ineffective set-pieces as stock characters file for their inevitable demise.

Daniel Hirsch (Sky High) and Kelli Maroney (Night of the Comet) work well as alpha lead Steve and frizz-headed heroine Jamie: a self declared “straight-A psych major who fucks on the first date” but the rest of the supporting cast are predominantly expendable, serving as dead meat under mullets or spray-frozen perms, in tight, low cut tops and thigh clenching sports shorts. We meet The Zero Boys on a Weekend Warriors’ Survival Game as the scrappy frat action soon sieves into terror when the gang take refuge in an apparently vacant yet fully furnished forest home (the owners leave a note stating guests are welcome in their absence) before being targeted by the silent, motiveless maniacs. 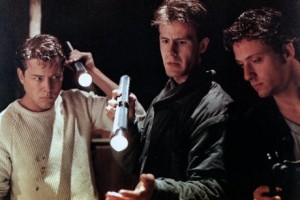 Shoot-outs and stunt sequences unwind alongside blood bursting squib eruptions while dead shells detonate, spitting from machine guns in slow-mo, accompanied by obligatory hollering and the boys spray slugs at the meddlesome madmen. The skeletal plot is scattered with snake stabbings, arrow piercings and a plethora of machete wielding wildcats who decapitate their way through the branches and supporting cast while crossbow brandishing psychopaths harass from the shadows.

Some of the trite horror aspects will amuse genre fans but fail to frighten or repel the most timid of viewers as the scares are mostly hackneyed and poorly orchestrated. The gang happen upon a torture chamber in a nearby barn, with a VCR playing the maniacs’ previous, recorded antics. A character ambles into the woods to investigate a noise and starts talking to the forest a la The Evil Dead, while schlock/ ketchup scares like a head in a fridge/ corpse in a crate are deployed awkwardly and with zero élan. 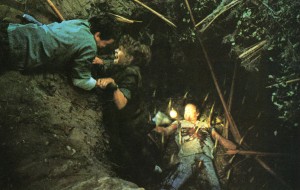 Martin Sheen’s brother (Charlie’s uncle) Joe Phelan stomps wild-eyed around the woods as one of the psycho circle, gracelessly conveying chaos and colour like a beacon amongst the mostly cumbersome supporting cast. As does John Michaels’ Casey, a Nazi uniform wearing, but actually Jewish, foe of the Zero Boys, commonly referred to as “Rabbi Rambo”.  Despite a promising start, Mastorakis’ film culminates as a fleeting cult misfire with a last act that plods lost in the forest like it’s hunted protagonists. The story slides into horror, from action, in the film’s latter half but it’s a scare-free frat splat attack that lacks tact, a strong supporting cast and effective narrative twists. Some of Hans Zimmer’s spiky synthesizer stabs adorn the visuals accordingly while pithy action set-pieces provide flawed but adequate thrills but The Zero Boys ends as a mostly defective mending.

Extras include: “Nico Mastorakis on Nico Mastorakis”: a mock interview featuring The Zero Boys director talking to himself. This squirm-stirring set up is initially grating but ultimately informative as Mastorakis discusses the film’s pre-production, casting process and how several crew members went on to form illustrious careers. Frank Darabont (The Zero Boys’ art director), Hans Zimmer, Co-ordinator Marianne Maddalena, who later worked with Wes Craven on several features and formed her own production company, Art Director Gregory Melton designed The Walking Dead and also served as Production Designer on Frank Darabont’s The Mist. Mastorakis also discusses a production deal he recently made with Warner Bros, to produce an upcoming heist picture. 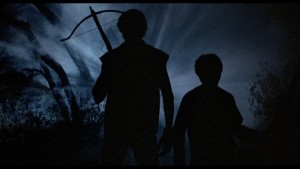 “Zero Girl” is an interview with Kelli Maroney in which the actress recalls the film’s production conflicts (mostly between herself and Mastorakis), stating that she felt like a refugee while roughing it on the night shoots, what it was like sharing a trailer with the rest of the cast, and the altercations that arose after Maroney refused to take her clothes off (at Mastorakis’ request) for the camera, as did all of the other actresses. “Blame it on Rio” features actress Nicole Rio (Sue) discussing what it was like living within a show business family, how she found working with Mastorakis, and the terror of performing alongside a live, purposely jaw-locked rattle snake.

Music videos for two of Hans Zimmer’s pieces “Main Theme” and “The Spelling of S.U.S.P.E.N.S.E” are merely montages of film scenes spliced to the scores. Main theme is an 80s action style piece while The Spelling of S.U.S.P.E.N.S.E is music for more terror laden sequences but neither are very dynamic. Also included are a stills gallery, theatrical trailer and audio commentary with Fangoria/ Gorezone editor Chris Alexander and actress Kelli Maroney.