Belgian horror-comedy Yummy is heading to SXSW in March, and the new poster art gives us a taste of the gore in store. 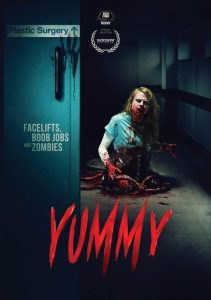 Directed and co-written by Lars Damoiseaux, the film follows a young woman and her mother who travel to a shabby Eastern European hospital to get plastic surgery. But when the woman’s boyfriend stumbles upon the results of an experimental rejuvenation treatment, he unwittingly plunges the hospital into the midst of a zombie outbreak.