YOU’LL FLOAT TOO WITH FINAL IT: CHAPTER TWO TRAILER

The final trailer for It: Chapter Two floated up out of the sewers and into San Diego Comic-Con today, and it’s a true carnival of horrors. 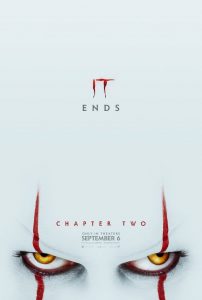 Directed by Andy Muschietti, the film picks up 27 years after the ending of the first instalment. The now-adult members of the Losers’ Club have gone their separate ways, all except Mike Hanlon (Isaiah Mustafa), who remained in Derry. But their old pal Pennywise (Bill Skarsgård) stuck around, too… and It’s been waiting a long time for the reunion.

Speaking of reunions, the new trailer gives us a better look at the Losers’ Club catching up over dinner at the Chinese restaurant. And that’s not the only brand new footage we see. The trailer also shows a pulse-pounding interaction between Bill Denbrough (James McAvoy) and Pennywise in a carnival funhouse.

Fans of the original Stephen King novel will no doubt spot many familiar scenes, including (spoilers!) the tragic death of Adrian Mellon, the fate of Henry Bowers, and what looks like Stanley Uris’s suicide. All in all, the film looks like the chilling conclusion we’ve all been waiting for.

You’ll float too when It: Chapter Two hits theatres worldwide on September 6th, 2019. Until then, enjoy the full final trailer below.